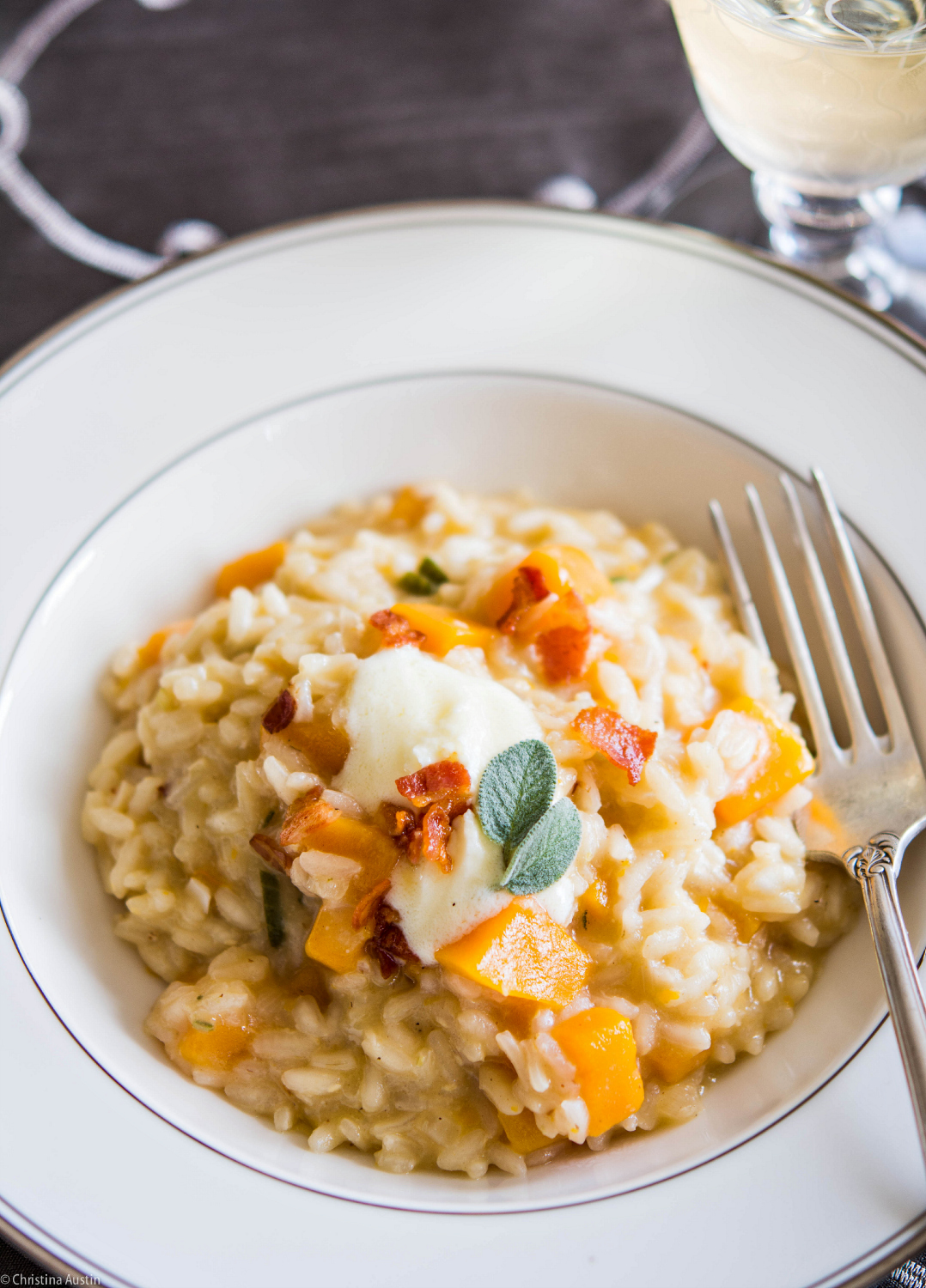 Butternut Squash Risotto – Just try an eat a side portion of this! It is so delicious, I made it for lunch.

Whenever I photograph recipes for the blog, I spend half my time yelling at George to get away from the food. I really love both of my dogs but they drive me crazy throughout the day. Buffy barks her fool head off whenever she thinks she hears something or the neighbour across the street gets into her car. George is getting into something about five times a day, which is showing that he is slowing down in his old age; it used to be about a dozen incidents of thievery or vandalism per day.

George is 12 now and every now and then he will show is age. Simon thinks that he is going deaf, but I hope that he is just so old that he doesn’t care that he’s getting yelled at which is why he will just keep on going through someone’s bag even though he’s been caught red-handed. I know that isn’t really true though. It is very likely that his hearing is going. He also hurts his back jumping up sometimes and if he acts like a young dog and runs hard at the dog park, he is a sore looking dog the next day.

There was an incident with George last week that had me in tears because his age and the reality of what that means really hit me. He was sleeping in his dog bed and wet himself a little bit. I was worried sick that he had a tumor on his bladder again and this time it wouldn’t turn out to be benign like it was three years ago. He hasn’t had any troubles since, so it was likely that he had an overly full bladder, hadn’t been out to do his business due to the frigid temperature outside, and he was comfortable sleeping in his soft bed. I still worry though.

I believe that the best dogs are also some of the naughtiest. They are too smart for their own good, full of energy, and have a big personality. George has all of that in spades but as I’ve said a thousand times, he really is the best cuddler on the planet. Every bad thing he does, he makes me forget my anger over it when he paws at the bed at night and waits for me to move over so he can jump up for his cuddles. He nestles in beside me and I wrap arm around him while nuzzling his neck. This is how I fall alseep every night.

I took this photo while pushing George away with my foot, which must have been funny to see since I was heavily pregnant at the time. I will gladly take many years of staying on my toes when food is around so that George doesn’t dive in when he sees his chance if it means that my beloved, naughty dog will be with me to cuddle every night.

Do you have a naughty dog? Feel free to share their best heist or feat of destruction.