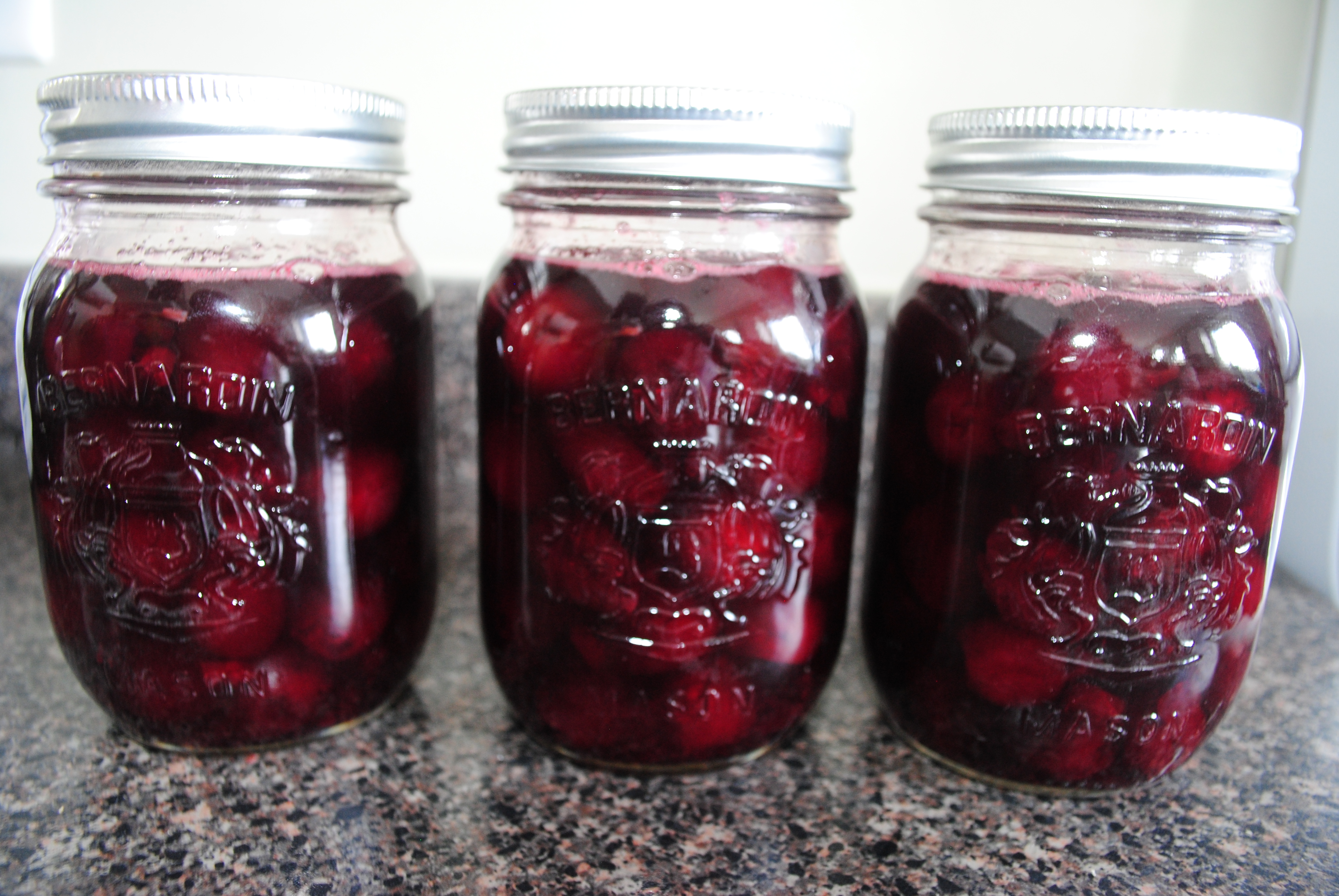 I ordered a box of cherries from Bailey’s last week but unfortunately due to the wet spring their supplier wasn’t able to come through. It was too bad but I ended up getting a bunch of cherries from Martin’s Family Fruit Farm instead.  It was my first visit out there and I came home with a flat of black raspberries too – more on that in the next post.

It turns out that Timothy loves cherries. He ate so many that I was worried he would have a big stomach ache. That kids can really pack away the fruit though. He was fine which is shocking since he ate as many black raspberries as he did cherries.

Since I had all these cherries, I needed to add a gadget to my kitchen. I went to the kitchen gadget store and over paid for the best one they had. I bought a Westmark Cherry Pitter

. It works great but the damn thing will have to become an heirloom because I paid $30 for it (stupid, stupid, stupid).  I also found that when you are pitting cherries using a cherry pitter, wear black, or if you want things to get a little sexy in your kitchen, go topless.  I’m still finding spots on the wall near the kitchen table that need a wipe.  I opted of the wear black and wear an apron option.  Before we entered the cherry pitter tool era we used the Redneck cherry pitter – eat the cherry and spit out the pit.  Since this was our pitting method, I haven’t ever made desserts or preserves with cherries before.

So, on to the little tale of making cherry preserves instead of pie filling. I was doing some reading online about how to can pie filling and pretty much everywhere I looked I was reading that you need to use Clear Jel. This is a special commercial modified corn starch that I would have had to special order. My cherries weren’t getting going to stay fresh long enough to order anything, especially from the U.S., so preserves it would have to be. I’d like to send a special thanks to *Kaela over at localkitchenblog.com and Punkdomestics.com for your advice which saved me from the disaster of adding regular old cornstarch before canning. I plan on adding cornstarch or tapioca just before using the cherries and liquid in pies or tarts. Hmmm, turnovers using store-bought puff pastry would also be really nice.

By the time I got around start making these preserves, it was 10 pm on Saturday night and I was exhausted. I pitted the cherries and then took the easy way out and added some brandy and a cup of sugar to them and put them in the fridge to macerate. I got back to them in the morning and I think they turned out pretty well. My photos of the jars didn’t turn out so hot, and through a Facebook vote from friends and family of the two pictures that weren’t totally awful it came out pretty much a tie. So below is the second photo that one friend said had an angelic glow. 😉  Professional photographers or people who know more about photography than I do would probably say ‘crap lighting’. What can you do though? Sometimes you have to just take the pictures and use what you have so that the blog post can get up before a little dude’s nap is over.

A little note about what to do when something boils over on your stove: first thing, blow on it – it will bring it down briefly enough so that you can get a spoon in there to stir it without making more liquid get on your stove like it would if you just put a spoon in right away. (The spoon would displace more liquid, therefore making more of a mess before it got better). Take the pot off the stove, wipe the stove and the bottom and side of the pot down and then carry on. I guess you figured out that this little project boiled over on me. I turned my back for 30 seconds and then smelled burnt sugar. Thank God I have a ceramic cooktop stove. 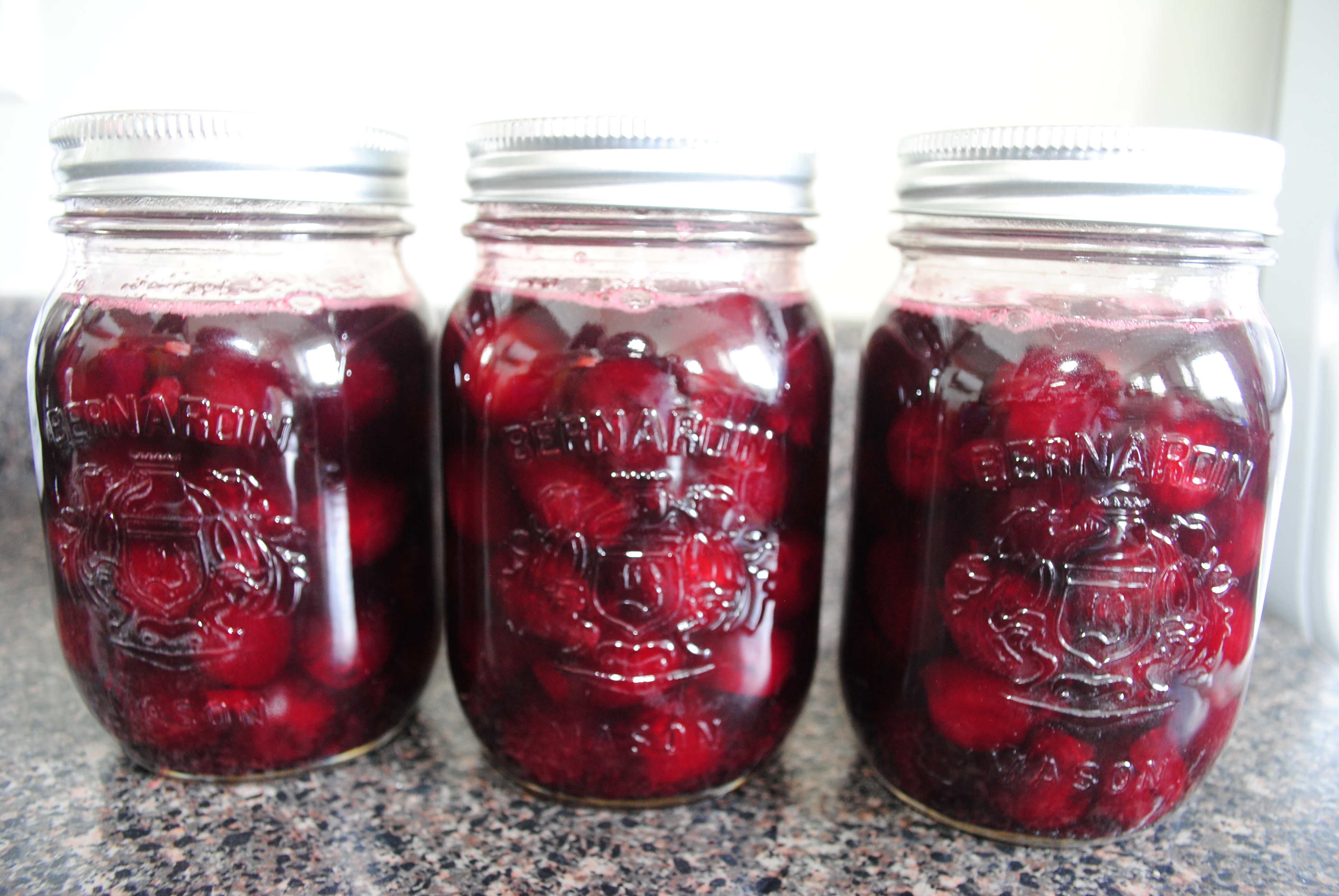 This is a very simple way to preserve cherries that can later be used as pie filling. Just add some cornstarch mixed with a bit of water.

Wash and sterilize (boil in a canning pot with a rack for 10 minutes) three 500 ml mason jars. Keep the jars warm. In a separate pot, sterilize a funnel and ladle. 5 minutes before the cherries are ready to be added to the hot jars, boil the lids for 5 minutes.