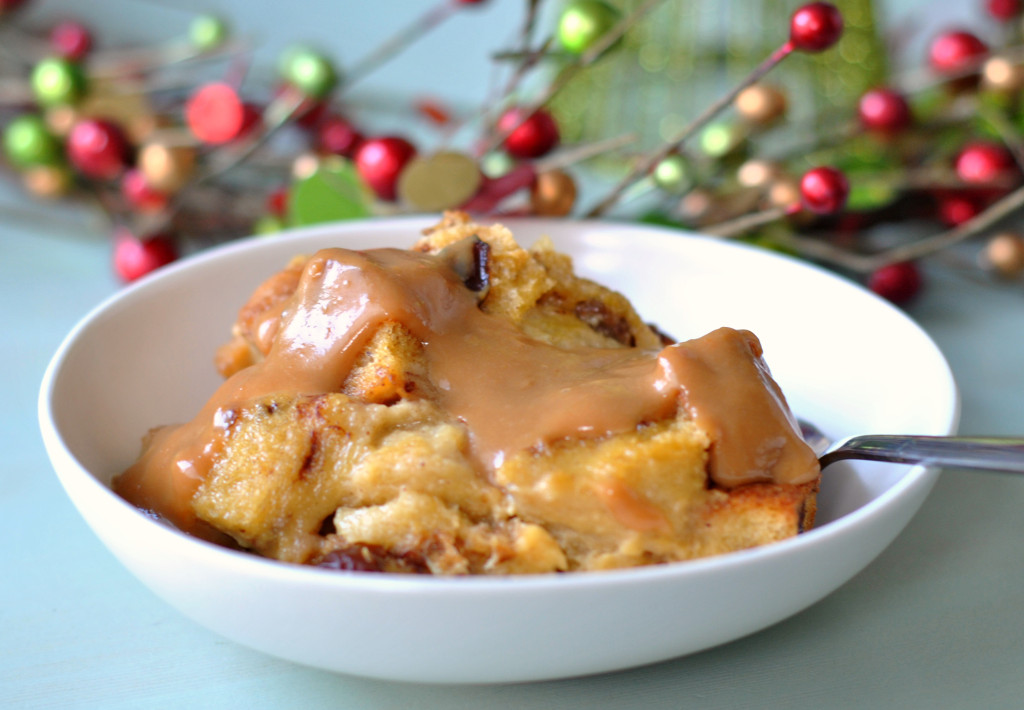 A simple holiday dessert that can be mixed together in less than 10 minutes.

This is my second favourite Christmas dessert, behind Trifle, and it is definitely the easiest one that I make. To be honest it is hardly a recipe it is so damn easy.  If your kids know how to crack eggs and stir then they could almost do it themselves. If they are allowed to use a knife to slice bread then go lay down for 15 minutes and let them put this dessert together.

This recipe is sort of from my Aunt Val. Years ago Uncle Norm and Aunt Val went to my parents house for dinner and she brought this as the dessert. I wasn’t there so I may be way off and maybe my Aunt Milli brought it, but whatever. It was sitting on the stove when I got home from wherever I was so I had some. From then on I have been making it. I knew the two main ingredients were cinnamon raisin bread and eggnog and just went from there.

During your pre-Christmas dinner grocery shop, pick up some thick cut cinnamon raisin bread, and some eggnog. You will likely have the rest of the ingredients at home.  Keep in mind that you need 6 eggs (3 whole and 3 yolks) for this and plan accordingly.

I used to buy dulce do leche but President’s Choice has discontinued the product so I hit the interwebs and found some great sites on how to make your own from sweetened condensed milk. This recipe that I found for Slow Cooker Dulce de Leche is the most detailed. I plan on making more this weekend so it will make a nice Christmas gift.

For many this bread pudding might be too soft. If you prefer a stiffer pudding, then reduce the eggnog by about a quarter cup to a half a cup and add an extra egg. If you have leftovers the pudding does stiffen up as it cools. In the picture this is pretty much right out of the oven which is how I serve it. You can put it in the oven when you sit down to Christmas dinner and it will be ready to serve when you finish making the coffee. 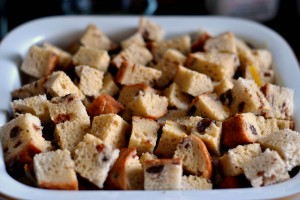 Cinnamon raisin bread with eggnog custard. Needs to sit so custard can be absorbed by the bread.

I have a confession. I ate the whole dish of the bread pudding that I made for this blog post. Simon can’t eat bread and Timothy didn’t like it (weirdo). I didn’t eat it in one sitting; it was over the course of 3 days which does make it slightly less gluttonous. This means that I ate about 2/3 of a cup of dulce de leche too. In case you are wondering, Eggnog Bread Pudding makes for a kick-ass breakfast and lunch. Go ahead, judge me. I don’t care. I didn’t even get sick of it and I will be making more on Christmas Day. I will share that one though, begrudgingly.

Cinnamon raisin bread with an eggnog custard, baked and then topped with either homemade or store-bought dulce de leche. A simple holiday dessert that can be pulled together quickly.

To make dulce de leche in the crock pot: fill a 250 ml mason jar with sweetened condensed milk, leaving a centimetre or more of space at the top. Place the lid on tightly and place in the crock pot. Fill crock pot with hot water until the jar is under at least an inch of water. Cook approximately 9-10 hours or until desired consistency and colour is achieved. For more detailed directions go here: http://www.theyummylife.com/dulce_de_leche