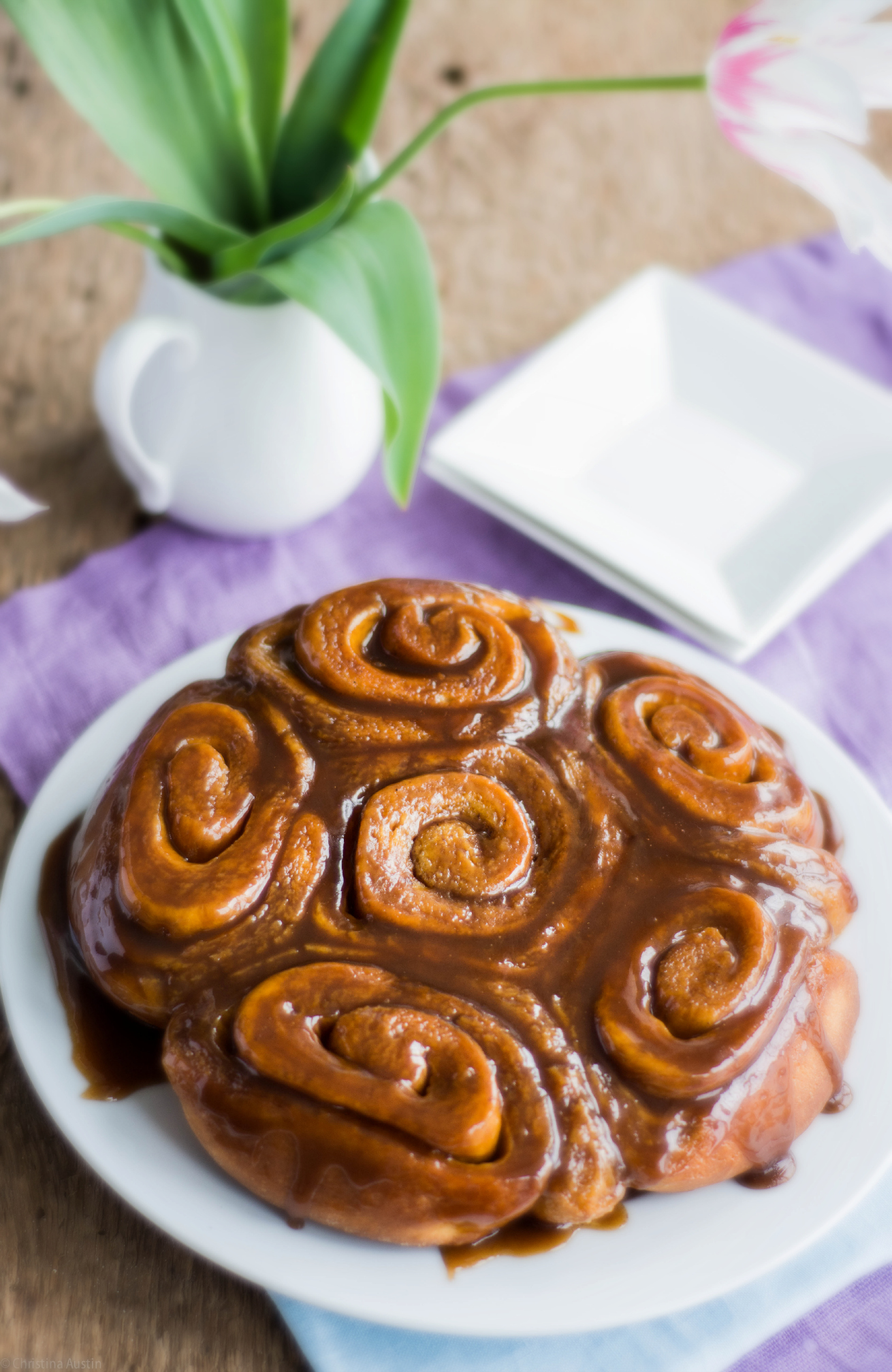 Cinnamon buns (or sticky buns) that are an indulgent treat. Make this freezer friendly recipe and freeze them unbaked.

Today is a big day for me. I have been working on this cinnamon bun recipe for ages and I have it down to a fine art now. It is also a big day because I am announcing to the whole wide world that I am expecting a new baby in November! I’ve had a rough go of it during my first trimester, both physically and emotionally. With Timothy I didn’t feel sick once, and with this baby I have had nearly continuous nausea for about 2 months. Thankfully I haven’t been sick because that is a day ruiner, every time. I really feel for those women who are suffering so badly that they can’t keep anything down.

On the emotional side of things, I thought, “Oh shit. What have we done?” I am unemployed with no prospects for employment any time soon and being pregnant will make it very difficult for me to find a job. I dearly love my boy but being a stay at home mom is hard for me because it was never part of the plan I had for my life. I am not a ‘kid person’. I always wanted a career and I was prepared to be a working mother after Tim was born. Many women will read this and may even want to say some nasty things about my desire for a career over the privilege of staying home. If they do, so be it. As it stands now, I will continue to be a pretty good stay at home mom and will hopefully carve out a career on my own terms through this blog and the historical podcast that I’ve been working on.

I am not a supermom and there are far better mothers out there to whom motherhood comes naturally. They love playing with their kids, show great patience, enjoy organizing play groups, and probably hardly ever let their kids watch tv. I am not one of those mothers. I do not get into playing, I am impatient, quick to yell, I spoil him with toys (which may fall under a ‘good mom’ category depending on the day), having other kids over to my house is anxiety-inducing for me, and I let him watch way too much tv.

I am very good at the nurturing side of being a mother. I’m a champion back tickler, I make good food for him most of the time, I make all the necessary appointments for speech therapy etc, I praise him for all the wonderful attributes he has and good things he does, I help him write his comic book stories, clean his clothes, and give ample hugs and kisses every day. I know I am a good mom but the emotional weight of being pregnant again while dealing with my self-confidence issues and career failures has been hard on me. Top that off with feeling like I may throw up all the fracking time hasn’t helped. As my bump grows and my nausea dissipates (most days), I am coming out on the other side and starting to feel the happy anticipation of a new baby joining our little family but it has been a slow process.

Having my pregnancy announcement in the same post as my cinnamon bun recipe isn’t a coincidence. I know it is not all that creative but I thought that something to do with ‘bun in the oven’ was a good idea, if it is a little on the nose.

I am very particular about my cinnamon buns. Absolutely no nuts and no white icing (like Cinnabon). If you want to ruin your cinnamon buns with pecans or whatever other horror you want on your cinnamon buns, then go right ahead. I am a pretty passionate anti-nut evangelist when it comes to nuts in baked goods that interrupt the soft texture of whatever treat is tainted with a walnut or pecan. I like nuts as crusts for tarts, see my rhubarb custard tart as an example, or cookies where the nuts are ground so the texture of the cookie remains consistent. I have always been a picky eater and I have improved as I have gotten older, but when it comes to nuts, I let my picky-eater flag fly proudly.

I have very loosely adapted two recipes to make this one. One recipe from an old Canadian Living book and another from a Cooks’ Illustrated recipe. They both had aspects of them that I liked but neither one was just right. So this is my mama-bear version of cinnamon buns. 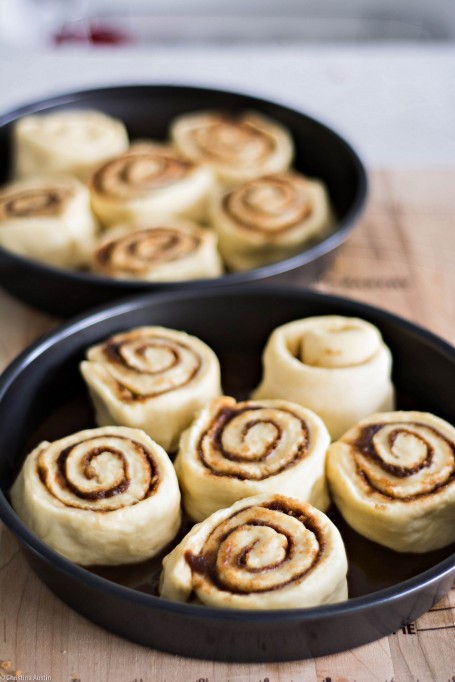 Instead of one 9″x12″ cake pan, use two round cake pans and freeze one so you can enjoy fresh baked cinnamon buns another day.

The recipe makes a dozen buns but that many at one time would just go to waste in my house. I like to put them in two round cake pans rather than one 9×12 cake pan. I wrap one pan well with plastic wrap and freeze it before the second rising in the pan. Once they are thawed and are at room temperature for about 45 minutes, I bake them as normal. I have also made a batch in a foil rectangular baking pan that came with plastic lid, frozen the whole thing and brought it over to a friend’s house as a gift so she could bake it in her house. That way she could enjoy the smell of baking cinnamon buns in her own kitchen. The make-ahead aspect of this recipe also works really well for holidays. Make them the week before Christmas, thaw them overnight in the fridge and bake them Christmas morning for an indulgent breakfast to accompany coffee by the tree.

This recipe calls for maple syrup and whipping cream in the sticky topping. This really helps it to not turn into a filling destroying hard toffee as the cinnamon buns cool. Pay close attention to the baking time though because if you let it bake too long then despite the maple syrup and cream you will be in tooth cracking territory. For two round pans, I found 29 minutes the perfect time in my oven. The buns around the perimeter are a deep golden and the centre one is lighter. With the larger pan, I wouldn’t go higher than 35 minutes but you would be safer to stick close to 30-33 minutes.

So are you pro-nuts in cinnamon buns (I shudder as I write that)? I’m a little nervous to ask what you think of my motherhood and pregnancy confessions. Do you think it is just hormones and a run of bad luck in the career department? 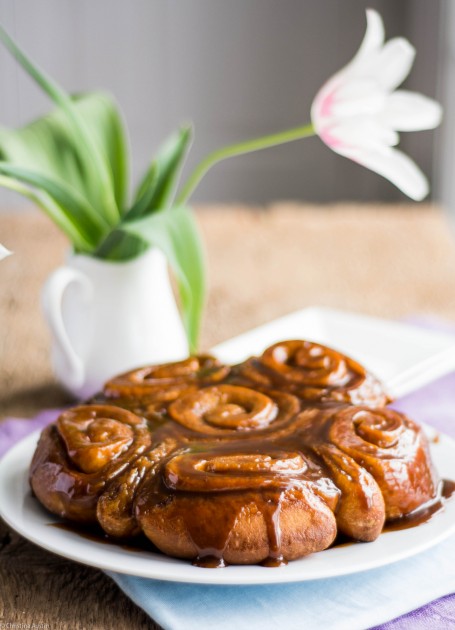 Delicious and indulgent cinnamon buns that can be frozen before baking, making these a perfect make-ahead treat for a special morning.

If not using a stand mixer, you can mix the dough to a shaggy stage with a strong wooden spoon. Mix all the wet ingredients together the same as the instructions and then mix the 1 1/2 cups flour in with the wooden spoon. Pour in the melted butter and mix vigorously until you get a thick sticky dough. Slowly add more flour and stir with the wooden spoon. When it becomes very difficult to use the spoon, start using your hands to mix the flour in while the dough is still in the bowl. When it becomes less sticky, turn the dough out onto a well floured surfaced and knead the remaining flour into the dough as directed in the main instructions.