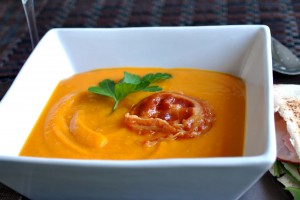 Peel, cube and roast the butternut squash before adding it to the pot for an even thicker and more luscious soup.

This is another easy soup recipe that is all brought together by my kitchen buddy, the immersion blender. We had about 4 or 5 butternut squashes sitting in the pantry from our CSA that I was getting worried would go to waste so I decided that soup is the quickest think to do with them. The next question was how was I going to flavour the soup? I’m not a big curry fan, so that option was out for me. Another look in the pantry led me to a whole head of garlic. Well, roasted garlic it is then.

The curious thing about using a whole head of roasted garlic versus a couple of fresh cloves sauteed is that you get a more milder but richer garlic hit. If I served this to my dad without telling him how much garlic is in it, he would quite like it. If I told him he would accuse me of trying to kill him with heartburn. I have used garlic in my cooking as a weapon on my dad before. He had it coming though.  The girls on my softball team agreed that Coach Earl needed to be taught a little lesson (many years ago).

I have made a lot of butternut squash soups but this is the first time I peeled the squash, then cubed it and then roasted it. The result was a very creamy soup with a smooth texture. I usually halved the squash, scooped out the seeds and roasted it that way. I have also peeled and cubed the squash and added it straight to the broth and let it boil. These two methods leave a lot more moisture in the squash which gives you a slightly thinner soup. At the end of the day, however you cook the squash is fine.