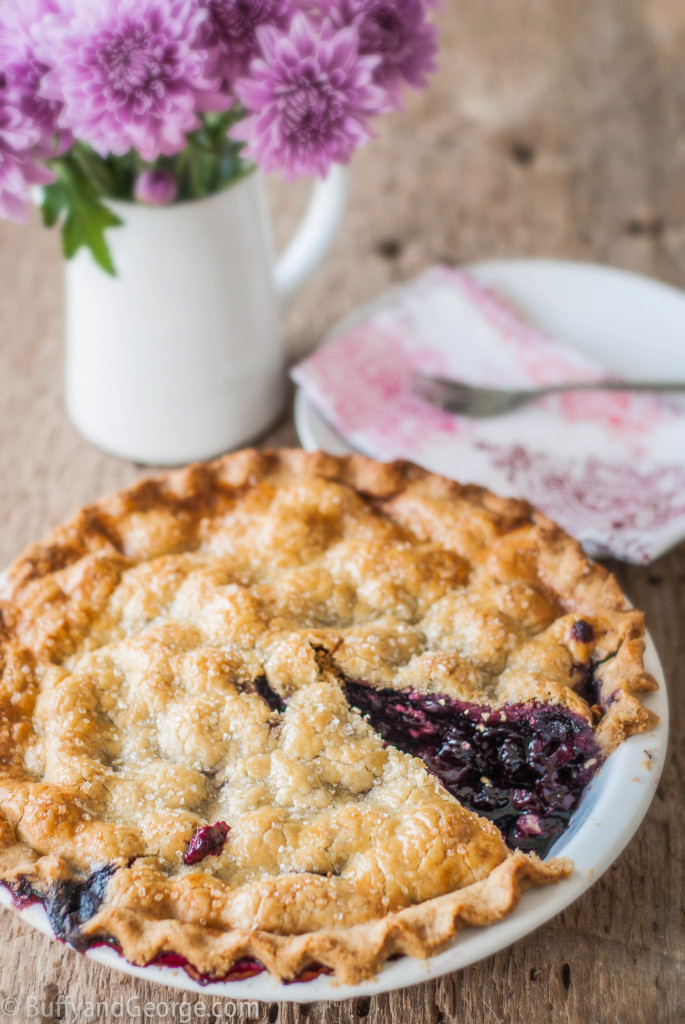 Black Raspberry and Cherry Pie with a Gluten Free Crust. Make it with fresh berries and cherries in the summer and use frozen in deep dark winter.

It is Berry Week! I’m joining with some other bloggers to celebrate one of the best parts of summer; berries!

I have wanted to get this recipe up on the blog for over a year now but every time I’ve made it, it’s been for a family event so I haven’t been able to get good photos of it for the blog. I’ve made it with a regular crust and a gluten-free crust many times over the past two years. Finally, about a month ago I was able to get some half decent shots of it and I knew that Berry Week would be the perfect time to post it.

Cherries aren’t technically a berry, they are a stone fruit, but black raspberries sure are. I had never seen black raspberries before I walked into Martin’s Family Fruit Farm a couple of years ago and saw pints and flats of these gorgeous berries on display. It happened to be my first year canning so I bought a flat of them. That first year I made Black Raspberry and Chambord Jam and froze bags of black raspberries. I did make this pie that first year but it was Christmas and who has time to photograph a pie on Christmas Day when you are hosting family for dinner?

If you can get a hold of black raspberries then buy as many as you think your freezer or plans for canning can handle. I love canning them with cherries in a simple syrup which is perfect on ice cream, pound cake, yogurt or Pavlova. With the flat that I bought today I plan on making black raspberry syrup to add to sparkling water and likely some type of compote. Thanks, Gloria Nicol, for the suggestions.

I have a love/hate relationship with making pies. I feel very accomplished when rolling out the crust works perfectly and it easily transfers to the pie plate. This seldom happens. It often cracks or I forget to hold the dough when it is rolled onto the rolling pin and it unrolls into a heap. It is during the pie dough transfer stage that I tell my husband to keep Timothy well out of earshot. If things go south then I usually curse a blue streak with a heavy emphasis on the F-bomb. This is why I use a method of rolling out dough and transferring the dough with wax paper. I may swear a lot when I make pies, a trait I inherited from my mother, but I do make perfectly flaky pastry that people rave about. Yes, I am bragging a little bit. 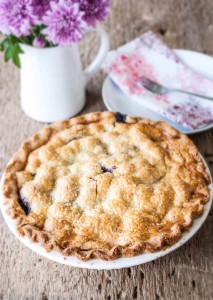 When I make a pie it is a bit of an event and because of this when I make a pie, I only make deep dish pies. I use 8 cups of fruit in my pies. Yep, none of this 4 cup crap. Whether it is an apple pie or a berry pie, I pile as much fruit as I possibly can into that pie plate before slapping that top crust on the pie. Since there is so much fruit in my pies, it will inevitably dribble over. Oh well. I put a piece of foil right on the bottom of the oven, under the rack to save a little clean up. It doesn’t work perfectly but it helps.

I often use frozen berries for pies and they work great. You do not need to thaw the berries before you use them but you will have to bake the pie a lot longer than if you had used fresh. I bake my pies for 15 minutes at 425 F and then turn it down to 350 F for usually at least another hour. When the filling starts to bubble in the middle it is done. Although sometimes it is bubbling over so much I just take it out before I see it bubble in the middle. The key is to see a lot of bubbling, hopefully in the middle of the pie, otherwise the corn starch will not work and you will have a gloopy underdone pie filling. Corn starch must boil with the liquid for it to do its job, which is to thicken the pie filling.

Black Raspberry and Cherry Pie with a Gluten Free Crust

*If you use fresh you will need to reduce the baking time. ** Example: Place your left hand under the pie dough under the wax paper and grab the left side of the wax paper with your right hand and flip it over onto the filling.

Here are the other participants in Berry Week: