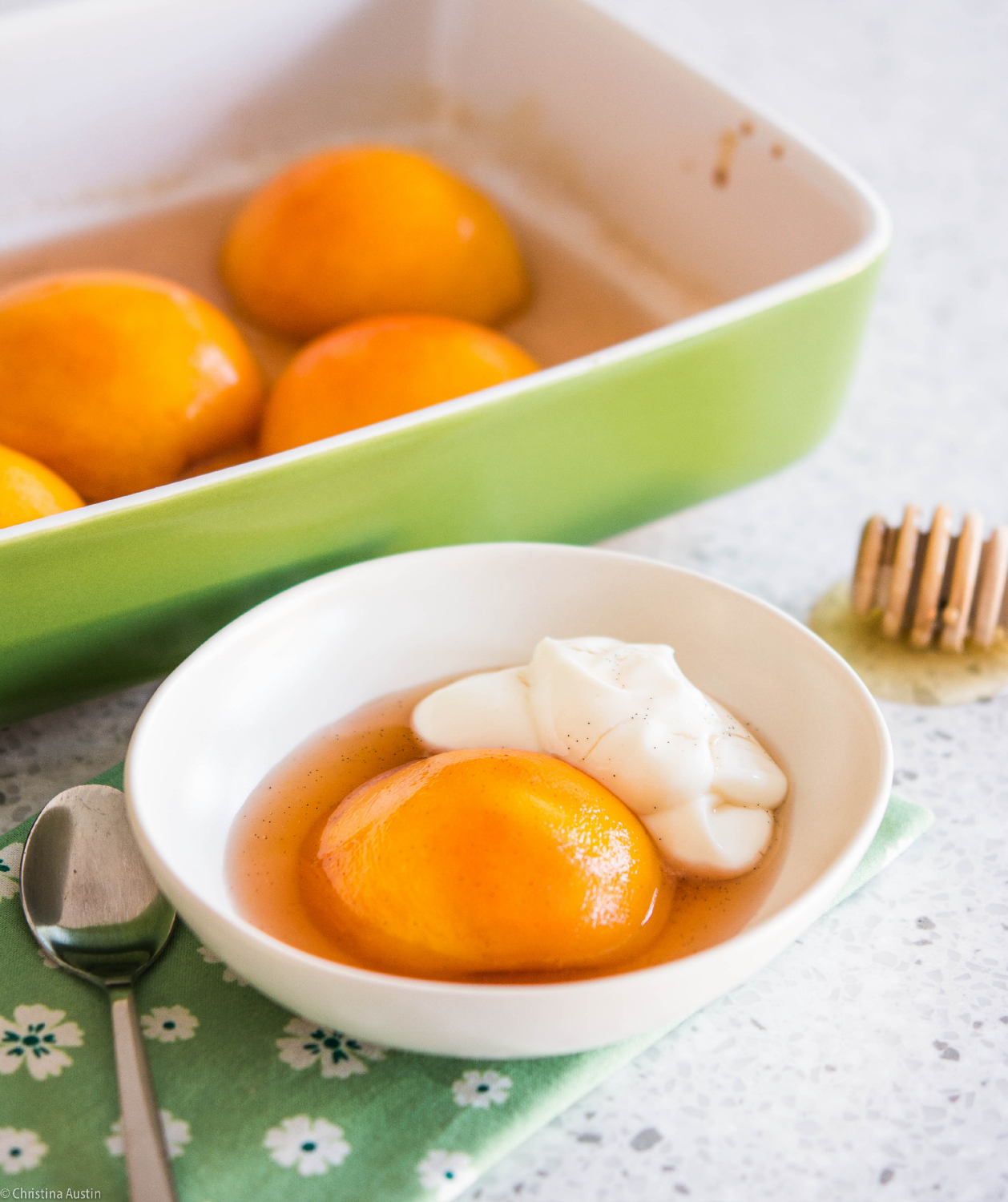 Baked Peaches in a Honey & Vanilla Syrup: Serve it with some vanilla Greek yogurt or ice cream for a quick and beautiful dessert. Peaches are just so pretty!!

Everyone needs an easy dessert in their back pocket. I’ve had a series of screw-ups in the kitchen lately and I’ve been looking for something to get my head back in the game. One of the dishes I made yesterday was a huge pot of tomato soup. I don’t have a recipe for that one because it was ad hoc affair due to the overwhelming amount of tomatoes I had on hand from my little garden. To share a recipe with you, I would like to have something that is easily replicated.

This dessert on the other hand, is very easily replicated and scaled up if you have more mouths to feed. I only used 3 peaches but you can use as many as would fit in your casserole dish. Not only did my son eat the soup I made, but he gobbled up his dessert in record time. I have seen him put mittfuls of fresh, local strawberries in his gob but he soon tired of those. I don’t fully understand how, but he was so over strawberries after a week. His fondness for Niagara peaches has remained steadfast. If I cut them up for him, he will eat them at every meal and snack. He has been eyeing up the jars of canned peaches that I have made and asked me when he can eat them. I told him that he can eat them in the winter. He may disagree, but I know that they will be a true treat when the only local fruit we have kicking around are apples. Sure, we like apples but canned peaches in local honey with a hint of vanilla will surely lift our mood when it is dark at 4:30 in the afternoon and the sleet is coming at us sideways.

These baked peaches keep in the fridge for a day or two, so make a little extra and store them in a container with the excess syrup. My friend Robyn is planning on making these to put on her oatmeal in the morning. She will forego the wine in the syrup and opt for a bit of lemon juice and water. These would be a great addition to a fancy brunch table either using the wine in the syrup or the lemon water.

While it is not strictly necessary to peel the peaches before you bake them, I really do recommend it. I suspect that the skins will come off after they peaches are baked, but I’m not sure.

Another recipe note: If you don’t have any vanilla bean paste, then use a couple teaspoons of vanilla extract. I briefly thought of using a whole vanilla bean but changed my mind and opted for the paste. To use a whole bean on this simple dessert would be quite extravagant. Sure, it would make a nice addition to the presentation,  but they cost about $1.50 a piece, or more, if you don’t buy them in bulk. Save the real vanilla bean for some homemade ice cream or creme caramel; the vanilla paste works perfectly in this. You still get the little flecks which look so pretty contrasted with the rosy syrup and those rows of peach bums in the dish.

Did I mention that I think peeled peach halves look like derrieres when next to each other? My mind goes to strange places sometimes. I should really show you a picture I cut out of a Martha Stewart magazine many years ago of a poached peach half. The food stylist cut it the wrong way, on many levels, so the spot where the stem was looks rather shocking. I kept the picture just because it makes me laugh every time I see it, despite it looking rather rude.

To Peel the Peaches
Baked Peaches

* If you don't want to use wine, use water mixed with lemon juice. You will need the acidity to balance the sweetness of both the honey and peaches.