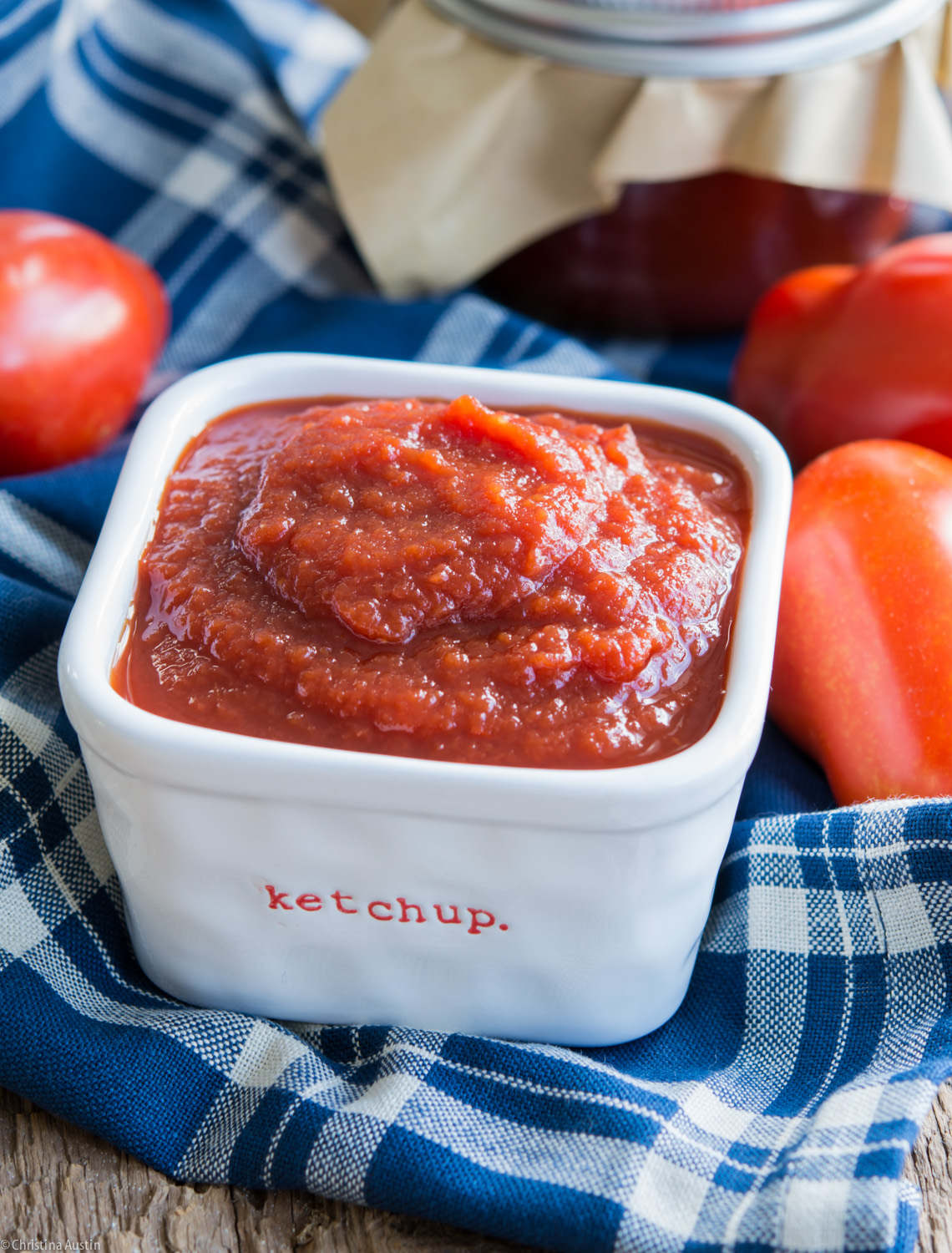 Homemade Ketchup – Step-by-step instructions on how to make your own ketchup that you and your kids will love.

There are many times when my aspirations heavily outweigh my inspiration. It is times like these that I end up with 25 lbs of tomatoes that I wanted to wish away.  They did not, however, turn themselves into the ketchup they were purchased to become nor did they disappear. They continued to ripen and I did not want to throw money away.

I made the ketchup using a new technique that I figured out because the recipes I followed last year were, frankly, a pain in the ass. Taste wise they were fine but it was really annoying to try and fit 10 lbs of tomatoes into the biggest pot I had, and still have it fall short. The recipes said to put the tomatoes in raw and cook them down and then puree them usually using a food mill. Well, I bought a food mill and I hate it. I have a food processor so no one can convince me that a food mill is better, because I am lazy. Sure, maybe you end up with a nicer texture but I don’t feel the need to add an extra hour cranking the handle on a food mill to the already long process of making ketchup. Admittedly, I do not own a really good food mill because I couldn’t really justify spending $75 on a new kitchen tool. The one I bought was $20 and I got it at Zehrs (grocery store). If anyone wants it, let me know.

Last year I made Slow-Cooker Ketchup but I prefer the texture you get when you strain the tomato puree through a fine mesh sieve. I also made Classic Tomato Ketchup but there was no way I could fit the 12 lbs of tomatoes in my big cast iron enamelled pot so I had to add them in stages. Supreme pain in the ass. This year, I still wanted the homemade ketchup but I needed to take some of the fussiness out of the method.

If you are like me and don’t have a pot large enough for 10 lbs of tomatoes, you likely have a pan big enough for a turkey. I mounded the tomatoes, chopped onion and pepper in my big stainless steel turkey roasting pan and roasted the lot for about an hour. I didn’t have to tend the pot by stirring it and keep adding the tomatoes that didn’t fit as the tomatoes cooked down. I didn’t worry about some tomatoes scorching on the bottom of the pot, or the juice boiling over. I just poked at the tomatoes with a wooden spatula after they had been cooking for a half hour. Once they were fully soft and pulpy I took them out and started to puree it all in my food processor. 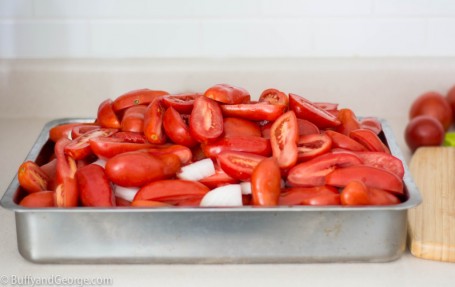 Cut the tomatoes in half, chop the onion and pepper and put it all in a large roasting pan [Before Roasting] 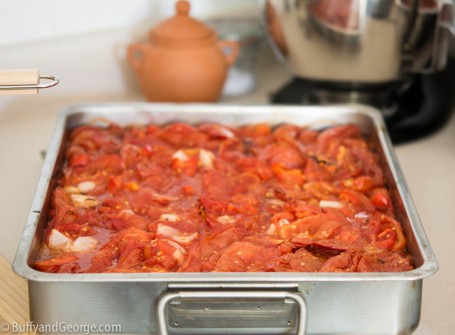 [After Roasting] Tomatoes cooked down and pulpy after an hour in the oven. 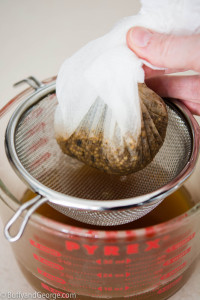 While the tomatoes roasted I put all spices directly in the vinegar, brought it to a simmer, put the lid on and turned the heat off. I let the spices steep for  the whole time the tomatoes roasted, except for the cinnamon. I took that out after about a half hour because it just got too strong in the first batch where I left it the whole time. I was out of cheesecloth (I totally forgot to buy some) so I strained the vinegar through one ply of paper towel. I separated the plys because I didn’t want the paper towel to absorb too much vinegar. I also moistened the paper towel so it sat better in my little sieve. 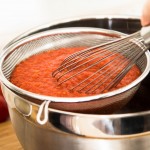 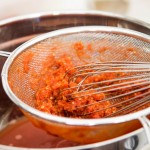 Use the whisk to stir and push the puree through the sieve. Discard the skins and seeds left behind. 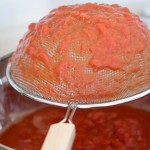 Scrape of the pulp that is stuck to the underside of the sieve. This is the good stuff.

Here are my final tips for you if you are jumping on the homemade ketchup bandwagon: wear black and long sleeves. The ketchup splatters a lot and if you are fool enough to wear a tank top like I was, a molten hot ketchup splatter will likely find your bare skin. I still have the mark on my shoulder. I’m just happy that Timothy wasn’t in the room to hear my colourful choice of words when I got my ketchup scald.