I have made this little appetizer several times for different occasions. I have brought it to book club, a wine tasting party (best kind of party in my book), and most recently to a fun little get together where half of the pinwheels didn’t even make it downstairs to the bar before they were gobbled up. The artichoke and asiago pinwheels do tend to go much faster but I encourage you to try the olive tapenade ones as well. I’m a very picky eater and I wouldn’t pop an olive into my mouth and chomp away but I do quite like the salty olives with the rich and crunchy pastry.

Rolling rich and salty spreads in puff pastry is not a new idea here on the interwebs and once you make this you will see why. Even the most culinary-challenged person can pull this off. I added a step of brushing lightly beaten egg and sprinkling grated Parmesan cheese but I usually don’t bother. The hardest part of this recipe is to remember to take the puff pastry out of the freezer so it has time to thaw before you want to use it. 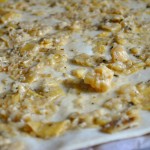 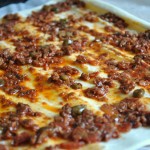 I generally shop at Zehrs so the President’s Choice brand products are often in my cart. If you are Canadian and live in Ontario you will likely have a grocery store near you that sells PC Products. If you are reading this and live elsewhere in the world, then any artichoke antipasto spread and pre-made olive tapenade will do. Have a look in the condiments aisle, that is where I find the jars I used in this recipe. The key is small chunks that will spread nicely over the puff pastry and not be too lumpy when you roll it into a cylinder before slicing into the pinwheels.

Another little tip is that if you don’t have a very sharp serrated bread knife, then pop the cylinders in the freezer for 10-15 minutes before slicing. Otherwise you will squish them as you slice. Not a big deal- I have done it and I just manipulated them back into round shapes. 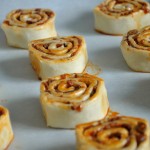 Slice rolled puff pastry about 1/2″ thick and place the pinwheel on a baking tray lined with parchment paper. 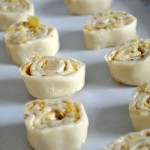 Aritchoke and Asiago Pinwheels ready for the oven

When I made these the other night I was short on time and I had forgotten to take out the puff pastry to thaw 2 hours before I needed to bake it like it said on the package. I took the pastry rolls out of the box and set them on the counter. I only had time to let them thaw for an hour. It worked out pretty well except when I was unrolling them as I got closer to the centre it was still pretty frozen. I just unrolled it slowly and used the heat of my hand to prevent it from cracking. I did not put it back in the freezer before slicing mainly because we were already running late.

Find an excuse to make these and let me know how it goes.

Simple and quick appetizer to make using store-bought puff pastry and tapenade spreads. Lovely served warm from the oven but they are just as good served room temperature.