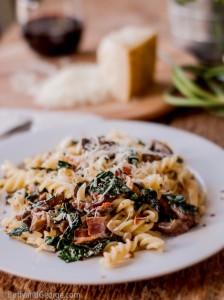 You know those days when you really don’t feel like cooking anything but you also don’t want to spend $30 on some shitty take-out dinner that the kid won’t eat anyway because he actually just wanted Honey Nut Cheerios? Yeah. That. I was very tempted to have cereal for dinner too the first night I made this but I was feeling pretty guilty about letting food go to waste in the fridge.   I remembered that I had kale from Bailey’s Local Foods. I also had some Enoki mushrooms that I’d bought to use for a different recipe that was […]