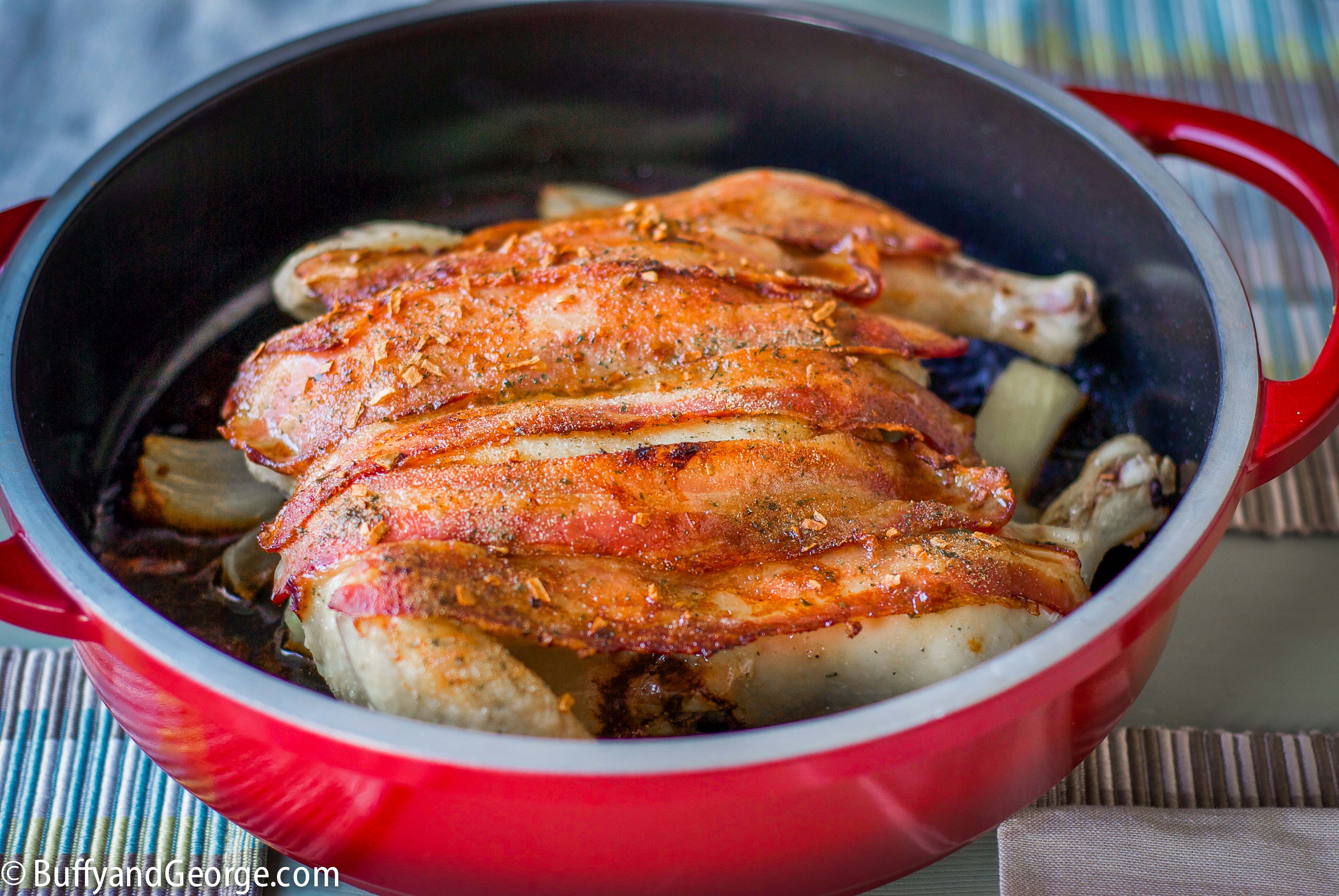 Spatchcocked Chicken roasted under a bacon blanket. The chicken is moist and flavourful and the bacon makes a great appetizer while the chicken crisps up when the bacon is removed.

Yep, it sounds a little dirty and I won’t lie; I too giggle a little bit when whenever I hear the word ‘spatchcock’. By spatchcocking the chicken I was able to get a larger surface area to lay the bacon on than if I had roasted the chicken whole. Either way works but more bacon is better.

I knew this recipe would be a rousing success in my house and I needed that. Earlier that morning I had an epic fail with a gluten free pie. I have made many gluten free pie crusts with great success but this time the filling mutinied on me and totally destroyed the bottom crust. The top crust was beautiful but the frozen peaches I used leached out too much water and caused the bottom crust to become a disgusting pale paste intermixed with a gelatinous peach filling.

I usually swear quite a bit while making pie crusts because I almost always split the rolled out pastry as I transfer it to the pie plate. This time I was cursing a blue streak when I cut into the pie that had a perfect golden crust on top but a filling that looked to be made with glue. I won’t tarnish your delicate sensibilities with what I said but here is a hint: a word said often was the long form of Mofo.

When you have a kitchen failure it is best to move on to something you know will be a success. Don’t be put off by the technique of spatchcocking a chicken. It is really quite simple and much easier than quartering a chicken.

If you aren’t familiar with what spatchcocking is, it is cutting the spine out of the chicken so that it lays flat. My husband usually does the butchering in my house but he was at work so I grabbed a big knife, flipped the chicken onto the breast side and started cutting. I had forgotten that the much easier way to do it is use a strong pair of kitchen scissors that can be separated for cleaning and simply snip the spine out. Yes, the crunch of bones is gross sounding but if you eat chicken then you should suck it up and deal with the reality of eating meat.

I usually try to use whole foods and not convenience mixes but for me the day called for the chicken and bacon to have some gourmet French Onion Dip mix sprinkled on them. It infused the chicken with a subtle onion flavour, along with the bacon, and it seasoned the bacon for a nice treat. I confess that regular chips with French Onion Dip is once of my favourite, but seldom eaten, party foods.  Feel free to skip the dip mix and just sprinkle on some fresh or dried herbs.

If you have a recipe fail in the kitchen, what would be a recipe you would make to rejuvenate your kitchen confidence?

Spatchcocked Chicken Under a Bacon Blanket

Spatchcocked chicken roasted under a bacon blanket. The chicken is moist and flavourful and the bacon makes a great appetizer while the chicken crisps up as it continues to roast after the bacon is removed.