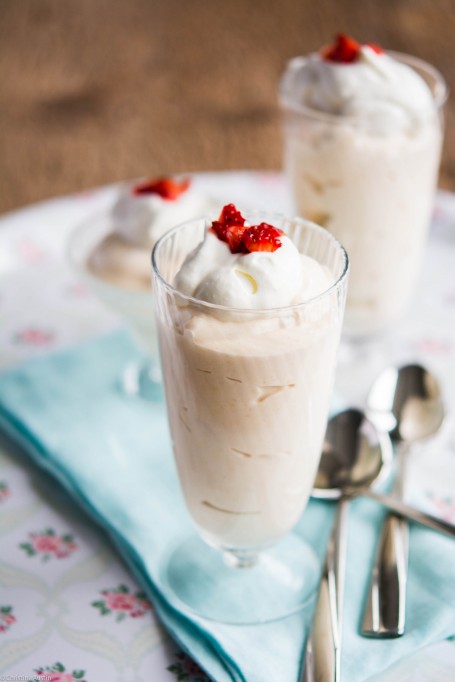 A light and tart rhubarb mousse that is the perfect end to an early summer meal.

Since becoming pregnant I have been on a pregnancy forum ‘birth club’ and I find it equal parts helpful, annoying, infuriating, depressing, and amusing. The people that have signed on to the group are all due in November so we are all in the same stage of pregnancy, give or take a few weeks. To be honest, I just go to the forum out of boredom more than anything else since this is round two for me and I don’t really want to put extremely personal questions to a forum. If I have questions I will ask my midwife.

One of the common forum threads relates to what pregnant women can and cannot eat. I am far less uptight about what I eat and don’t eat this time around. Since I felt so sick for about 8 weeks, I pretty much just ate whatever I wanted. If I wanted a ham sandwich that has the verboten deli meat, I ate it. I also have a cup of real coffee every morning. If I don’t, I get a splitting headache. You will see me in line at Starbucks with my big belly ordering a tall dark roast and giving people the stink eye if they raise an eyebrow about it.

Some of the women on the pregnancy forum let their pregnancy hormones and inner fears take control over them sometimes and post, what to me are amusing threads on the forum. To the woman who posted, “I just ate a hotdog. I’m so worried.” Don’t worry. The only thing I worry about when I eat a hotdog is getting mustard on my shirt. You will be fine. To the woman who posted, “I had bacon on my sandwich, is my baby ok?” Yes. Your baby is fine and thank you for the reminder that a BLT is a great idea for lunch.

Some of the other posts in the forum definitely lead to me becoming infuriated. To the women whose husbands and partners are total jackasses, I am very sorry that you have to put up with that crap in your life, let alone while you are dealing with the physical and emotional challenges of pregnancy. Here are some examples of what some of those poor women have to go through as they suffer through morning sickness:

After reading that thread I felt a compulsion to go upstairs to where my husband was working on the recipe index plugin for my blog, and give him a big hug. He has not said one thing to make me feel bad about being near useless around the house. He just laughed and shook his head in despair for the tools he shares a gender with.

I’m not totally lackadaisical about what I eat. I do know that there are things that should be avoided but North Americans tend to get a little more uptight about the pregnancy rules than other countries. I did screw up recently though. As I was making the rhubarb mousse, I realized that I really shouldn’t be eating this because it contains raw egg whites. I kept on making it and when it was done, I actually ate one of the servings. I know, it was risky behaviour  and I too had a minor freak out at my recklessness. No need to comment and give me shit about my foolhardiness. I kicked my own ass well enough. I texted Simon mid-freak out in between googling the risks of raw egg whites to pregnant women. I messaged him that I made the rhubarb mousse and ate some and that I shouldn’t have because raw egg whites could contain salmonella. I told him that I’m worried that I’m going to get salmonella poisoning and it will kill the baby. The next message sent with my thumbs of fury told him that the dessert was delicious and he will love it. Because he was in a meeting, he really only saw the last message and not the mini-freak out, so his reply was, “Nice.”

Next time I make this recipe, I will definitely use pasteurized egg whites (even though the concept weirds me out), to be on the safe side. I will save the egg whites and freeze them and use them in a pavlova on another day.  The egg yolks are cooked in this, so don’t worry about that. If you do make this recipe the normal way, just make sure that you use very fresh eggs but know that there is a very small risk involved if you eat raw egg whites. Simon ate 4 bowls of the dessert, I ate one and Timothy ate part of one and we were all just fine.

I want to add that a new forum thread was started honouring how awesome many husbands and boyfriends are towards their pregnant women. There are a lot of jackasses but there are so many wonderful men out there doing the dishes, making dinner, and putting kids to bed without complaint.

So, have you ever eaten anything that you know you shouldn’t have – pregnant or not? Feel free to also add any praise for your awesome partner who helped you get through something difficult – like a barfy first trimester of pregnancy.

A tangy and sweet rhubarb mousse that is the perfect ending to any early summer meal.

Use pasteurized egg whites if serving this to anyone who shouldn't eat raw egg whites. Save the four egg whites and freeze them to be used in a recipe that calls for cooked egg whites, such as a pavlova.