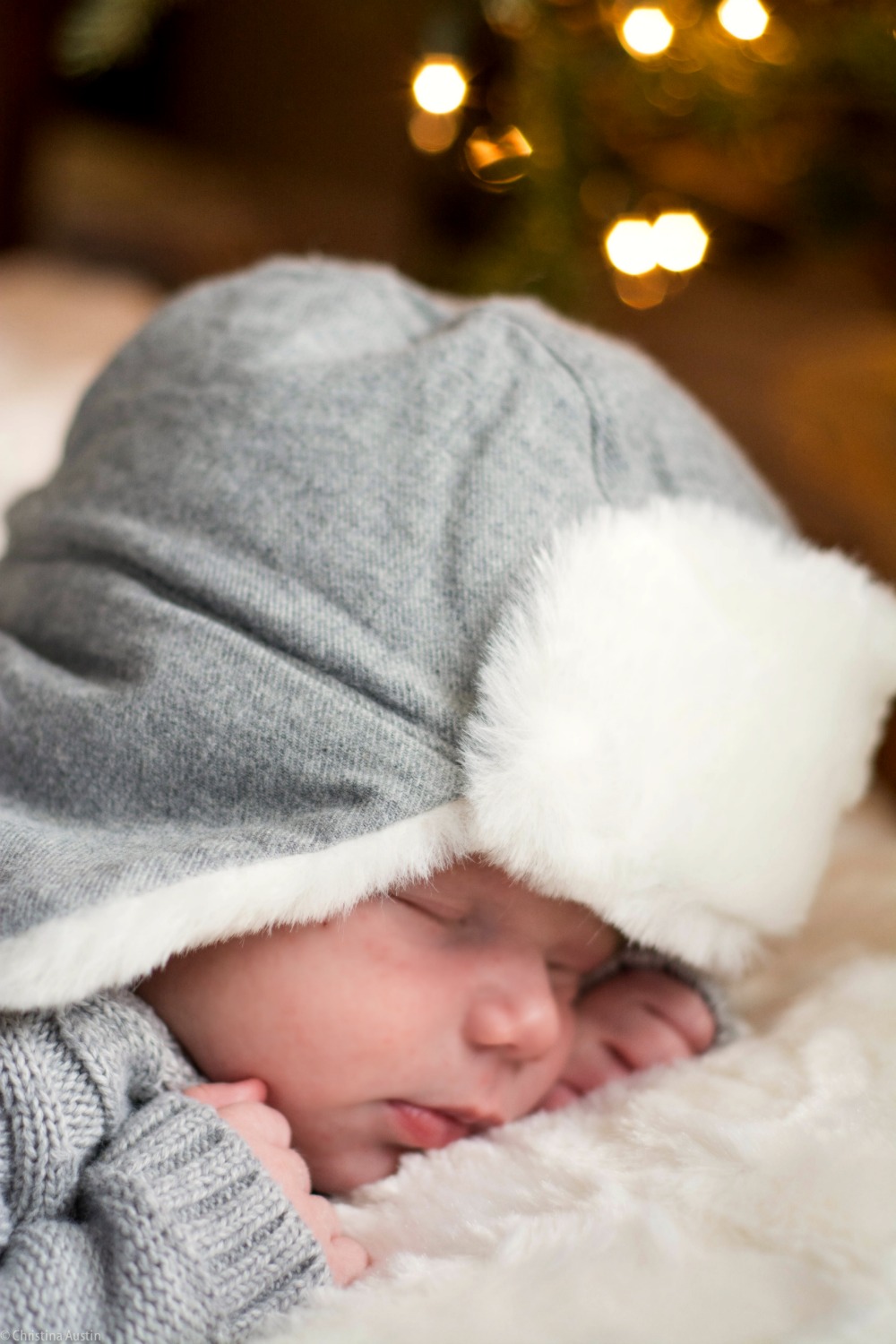 The anticipation, anxiety and preparation as we awaited the arrival of our second little boy are over. He arrived early in the morning on November 21st and it has been quite an eventful month and a bit since he came. Our 9 lb 2 oz boy is named Patrick but we often use the nickname we gave him, Kit.

I had to step away from blogging for a lot longer than I had anticipated. We were busy preparing for Christmas and getting to know our baby boy when the poor little guy developed a condition called Pyloric Stenosis. Feel free to google it but what it basically is, is that there is a muscle a the bottom of his stomach that got too big and strong and was stopping his food from passing through to his intestines. The only direction his food had to go was up and out. He was throwing up nearly all of his feedings with authority and then his wet diapers started to go way down. That meant a trip to the hospital which ended up being 3 days in our local hospital and then transferred to a children’s hospital in London where he had surgery.

The surgery was very minor and he recovered quickly but it was a very long, excessively sleep deprived week away from home as we comforted out little baby. He wasn’t able to eat for about 4 whole days and it is just awful seeing tubes coming out of our tiny, 2 week old baby. He has been making up for lost time with all his feedings since and he has been putting on some adorable baby chub the past couple weeks.

I don’t have a recipe for you today but I will give you a little tour of Kit’s nursery. It is a cozy, bright little room that used to be my office. I didn’t change the paint colour from when it was my office because I prefer a neutral colour in a child’s room. The room was a gaudy baby blue before I painted it since the previous owners of the house liked to hit you in the face decor-wise with the colours they chose for the childrens’ rooms. Timothy’s room was a little girl’s room before and it was Pepto Bismol pink.

When you walk in the room now, you first see the grey bonded leather chair. I love the look of nursery chairs but they are really made for women since they have a slender seat and back to them. This is a regular glider chair that is comfortable for my husband to sit in. The bonus is that it is also a recliner, and from previous experience, having a chair that one can sleep in is a godsend on those nights when the baby just won’t sleep without being held. Our Timothy has a rocker/recliner in his room and we use it every day for story time.

The shelf in the room is an Ikea BORGSJÖ shelf unit in white. The crib was Timothy’s crib and it was originally chocolate brown. I wanted a new white crib but since we already had a crib, it would have been a waste of money. The solution was to spray paint it. I didn’t source out organic or special paint for it. I simply bought the colour I liked from Home Depot and my husband spent a weekend painting it. Spray painting a crib takes a lot more cans of than you’d expect. I didn’t really factor in that a lot of the paint would go between the slats of the crib. I think it took about 4 cans in total. It probably would have been better to have painted it with a brush, but live and learn.

What used to be a closet with regular sliding doors, is now a changing station. The dresser is a Hemnes 3 drawer chest from Ikea. One of the extravagances in the room, aside from the chair, is the change pad. I saw it in a baby boutique when I was only a couple of months pregnant. I hemmed and hawed over buying it since it is a $100 change pad but I don’t regret the purchase at all. The regular change pads split and we had to buy two of those last time with Timothy anyway. We also felt that we never had enough change pad covers since they spent most of the time in the laundry after being peed on, or worse. The change pad we have now is called a Peanut Diaper Changer. It is available through baby boutiques but it is also available through Amazon.

One of the focal points in the whole room is in the changing area. I saw on Pinterest that someone had wallpapered the inside of their closet and I loved the idea. For the wallpapering job I brought in a ringer: my mom. She wallpapered the s$*t out of our old house. I’m talking the full gamut of two types of wallpaper in one room separated by the co-ordinating border. The border in the kitchen even had ducks on it. It was 1980s-tacular. She was a bit rusty but she got back into it and did a fantastic job.

Kit may want a more boldly boyish room some day but for now I will keep it neutral. He does enjoy staring at the accent wall while on his change pad, so I think it is a good choice. Mama is happy with the room, so that’s what matters. 😉 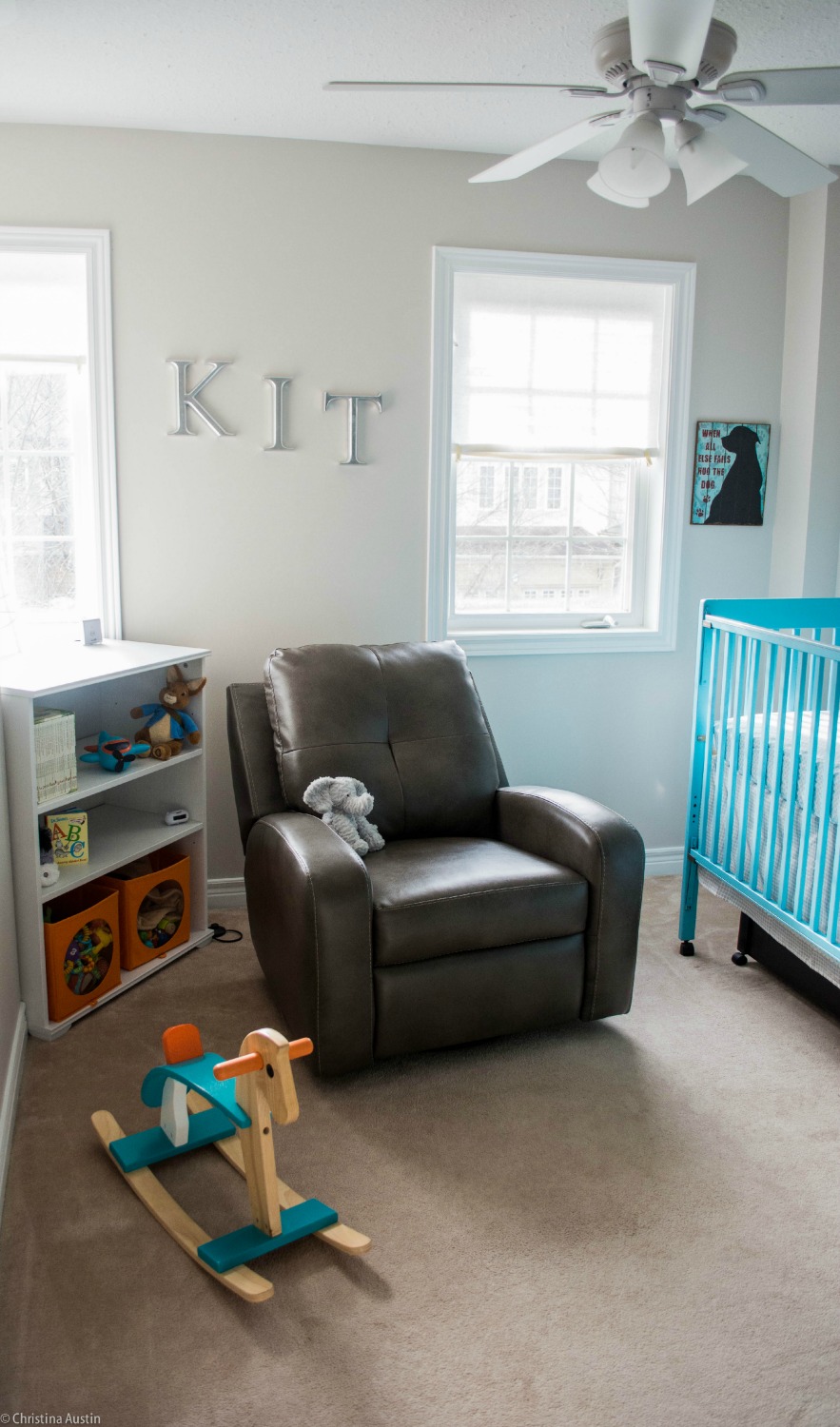 Baby boy’s nursery with neutral wall colour and pops of turquoise and orange for accents. 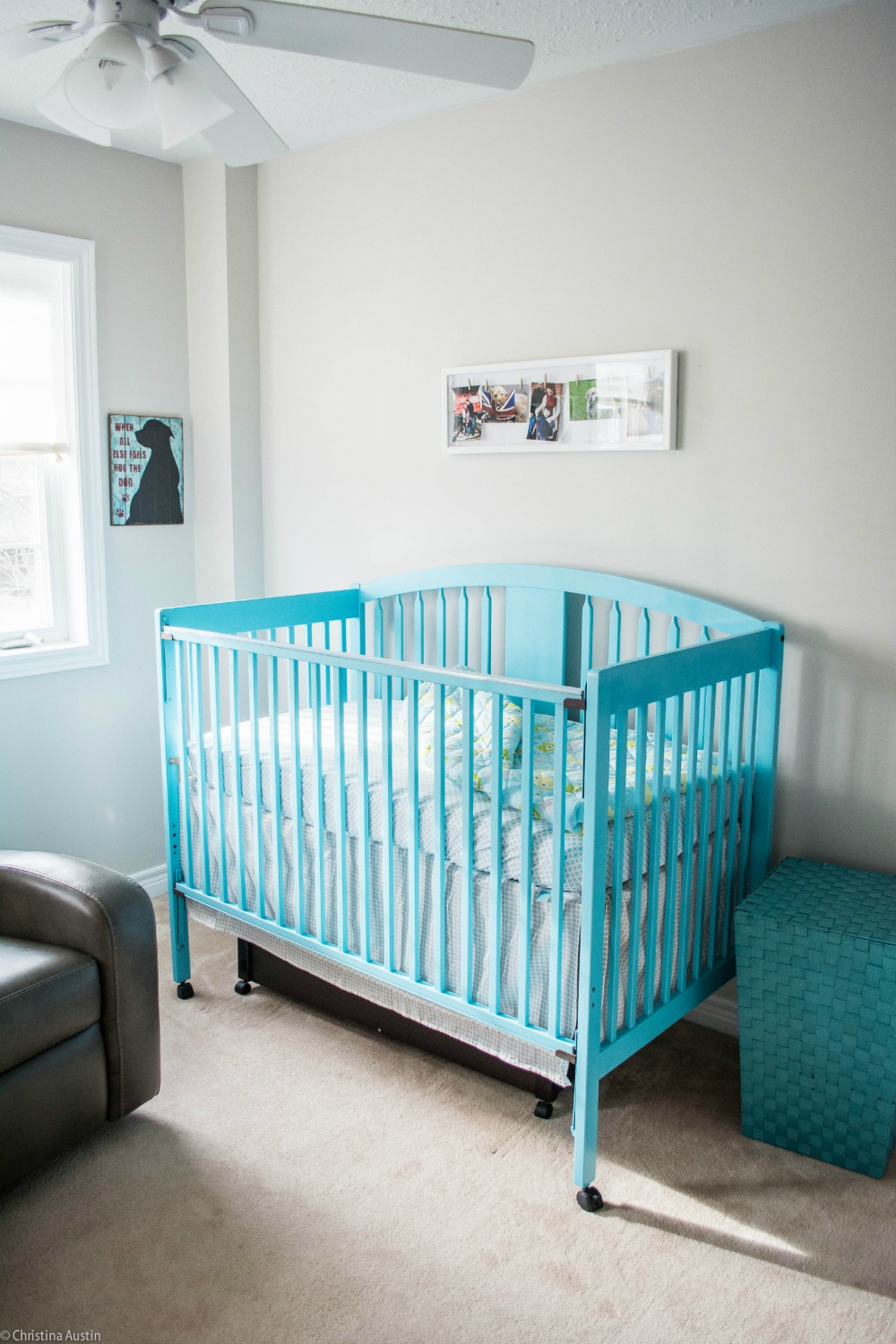 The crib was originally chocolate brown but it was spray painted turquoise. Family photos hang above the crib in simple white frame. 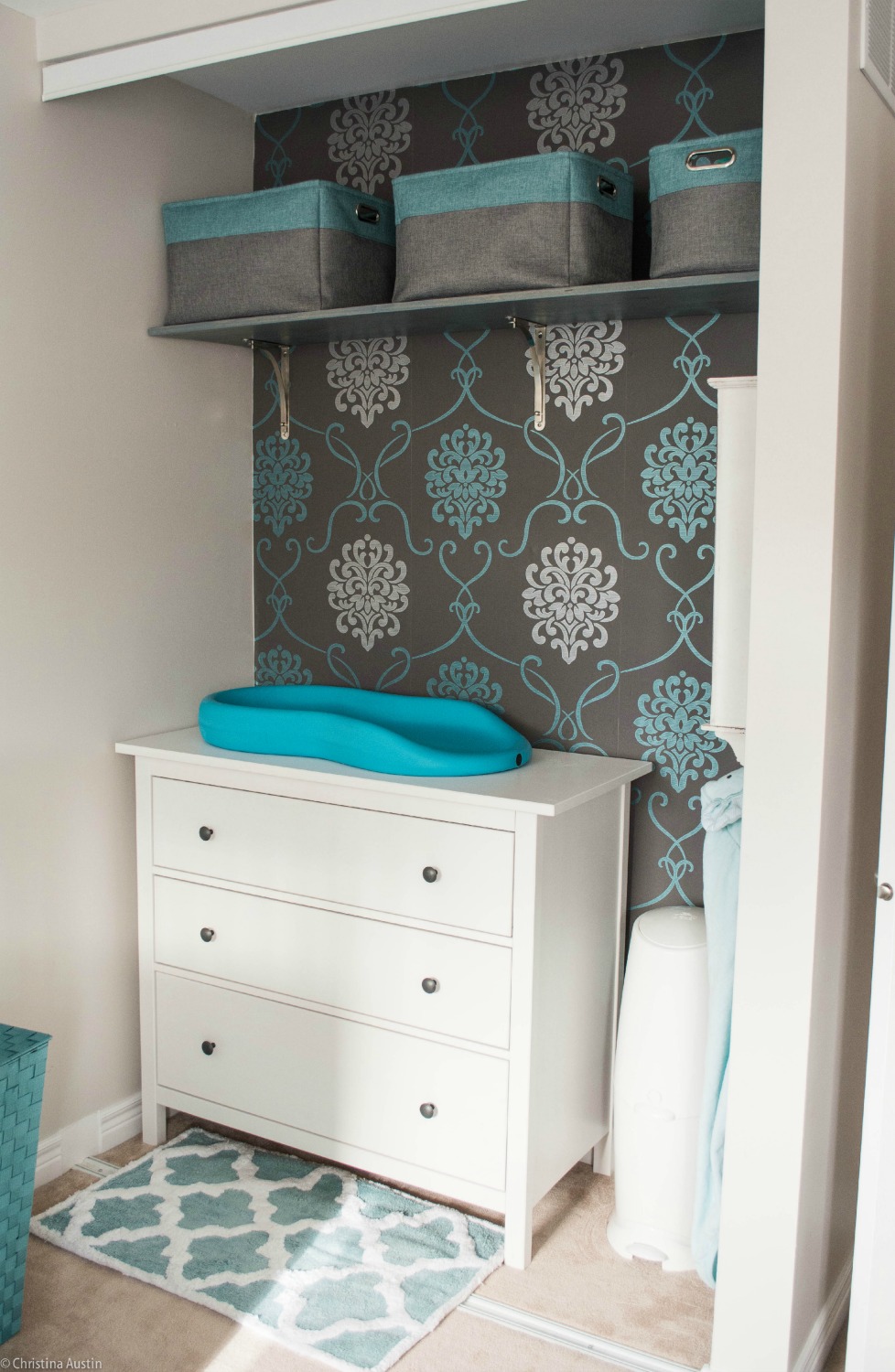 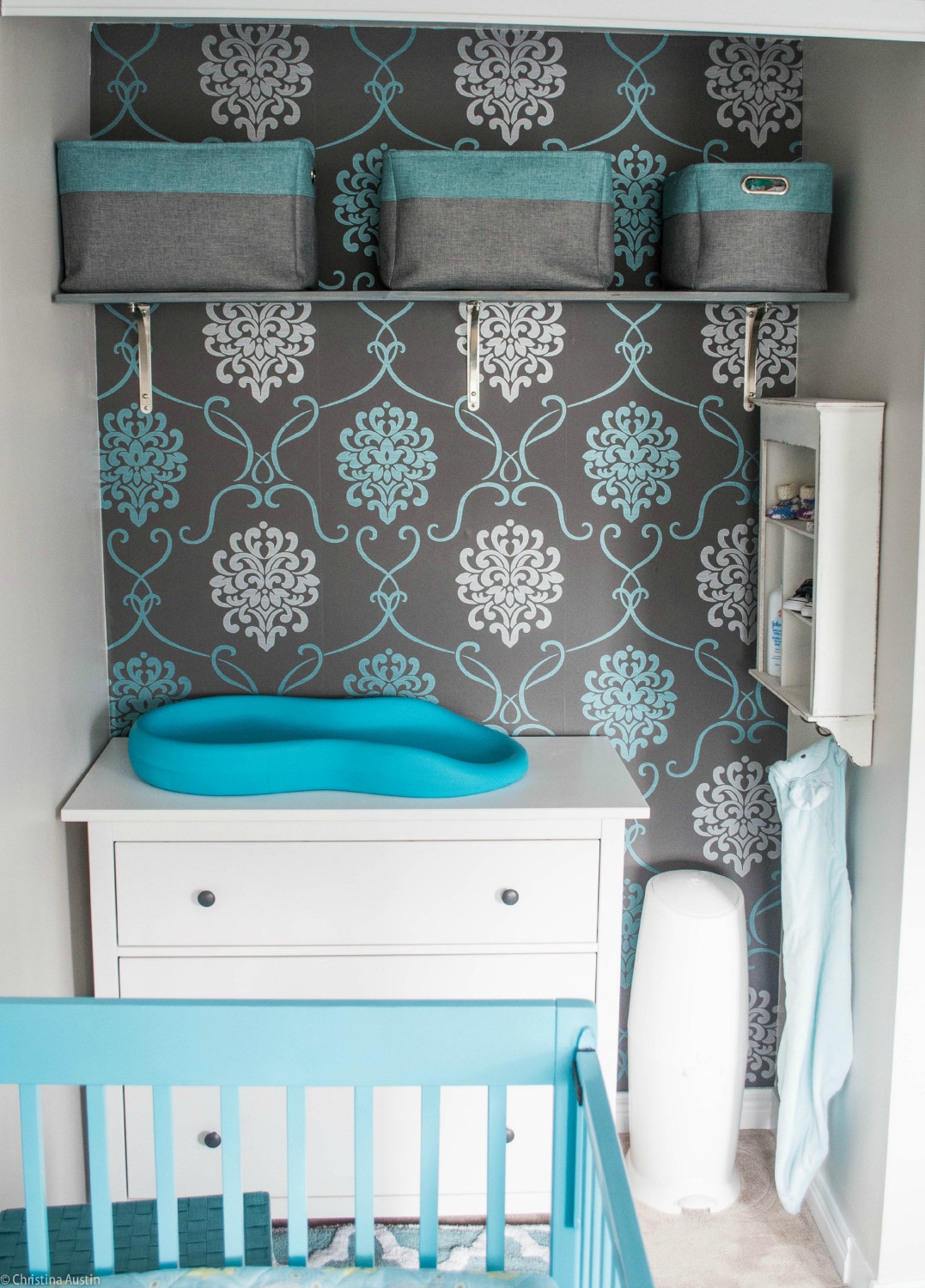 Disclosure: This post contains an affiliate link. If you click the link and make a purchase through Amazon, I will receive a small commission.