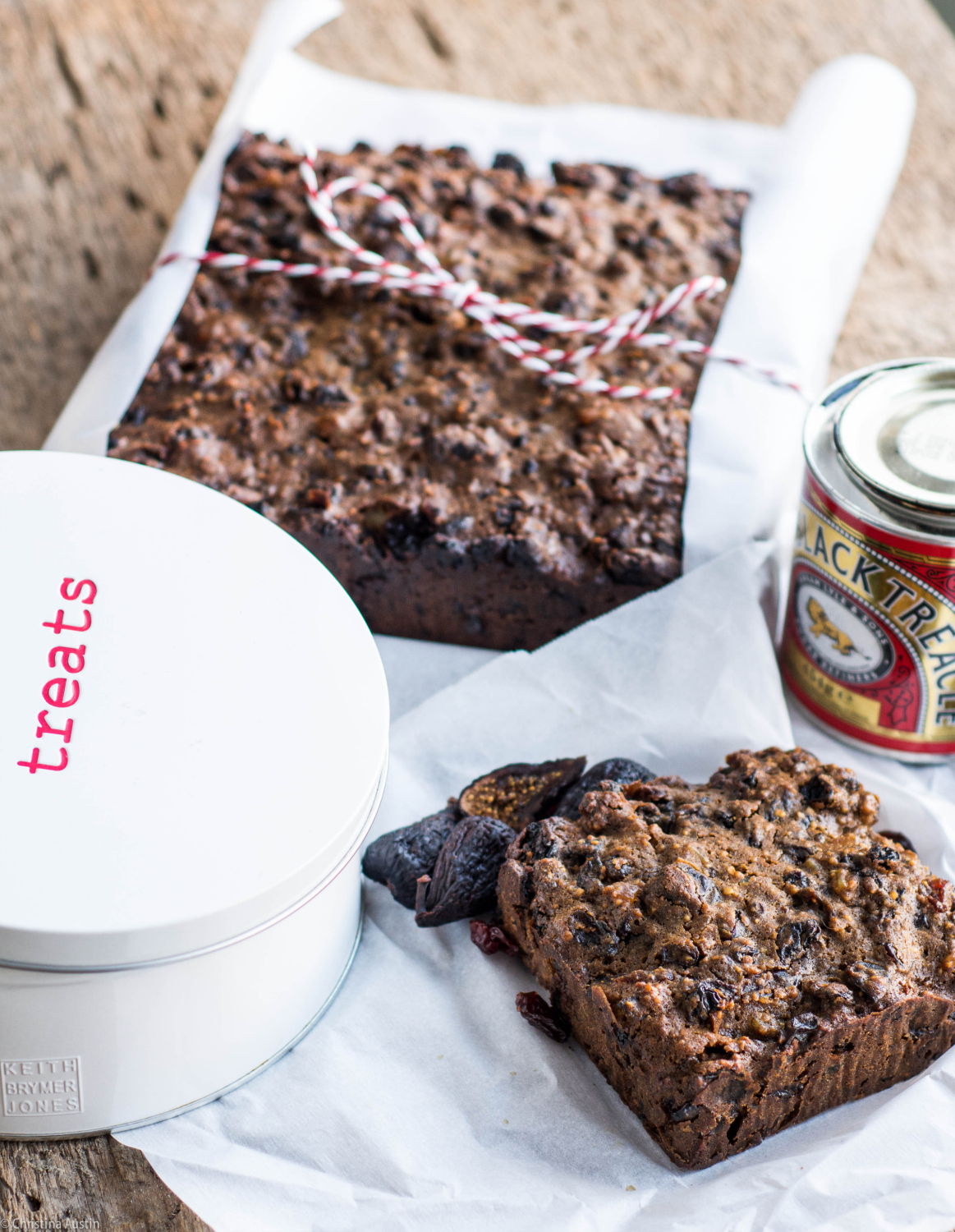 Traditional dark Christmas Cake with dried figs, cherries, raisins, currants, & sultanas. Kept simple without the addition of royal icing but liberally dosed with brandy once a week as it matures for at least 3 weeks.

This did not start with me. I remember my mother oiling brown paper bags to line Grandma’s cake tins that were only ever used for Christmas cake. I remember my parents diligently drizzling brandy over the cakes stored in the cold cellar once a week in the month leading up to Christmas. In all those years that my mother made those cakes for my dad, I never had a piece. They seemed strange and full of lumpy fruit and nuts that I avoided as a child.

Mom drifted away from making Christmas cake sometime in my teenage years. She still made many of our other traditional Christmas treats, such as shortbreads, which is an absolute necessity for Mom at Christmas. I think it is hard-wired into her British DNA. The need to make this cake shortly after the start of Advent so that it can mature made it challenging to squeeze it in during the busy weeks before Christmas break. Getting out of the habit of making the Christmas cakes led to the pans being tucked away in storage for well over a decade.

When my dad asked me if I wanted the pans that were his mother’s, that my mother had used for all those years, I could sense the hope in the question. The hope that they would carry on and be used for a traditional, dark Christmas Cake again.

I made a traditional English Christmas Cake for the first time last year with Grandma Elliott’s old dented pans. My mom used a recipe from the Five Roses Flour cookbook, but I had cut one out of the Jamie Oliver magazine that I wanted to try. I made a few tweaks to it and I did not ice it with marzipan and royal icing like they did in the magazine. I kept the farmhouse tradition of my family of not gilding the lily and kept the cake plain. Just how my parents like it.

Even if you don’t love fruitcake I encourage you to make this just for the smell alone that permeates your house while baking. The scent of the amalgamation of butter, brown sugar, molasses, soul-warming Christmas spices, and the rich bouquet of dried fruit, is so incredibly intoxicating. I was tired and stressed out with a newborn but I made this cake while my eldest son was at school and the fragrance washed over me and I knew Christmas was coming.

Dousing the cakes with a brandy yesterday gave me a chance to recognize that I was making progress towards creating the special Christmas I want to have with my family despite the current challenges we have been faced with the past week. Opening the tin to check on my dad’s Christmas present and letting that aroma drift towards me made me smile. I won’t be decorating gingerbread cookies with a handful of little kids this year, nor will I be doing a cookie exchange, but the important treat is done.

I have some traditions of my own that I’ve started with my little family, such as: Gingerbread Madeleines for Christmas morning, followed by brunch that includes Buckwheat Crepes made on Christmas Eve. I may also be cheating a little bit by ordering some croissants, quiche and a Buche De Noel from a French style bakery in town. I still plan on pulling together a turkey dinner on Christmas Day with the help of my mom.

I want new and old traditions to be part of my young family’s Christmas Day celebration. Using Grandma Elliott’s old tins for a Christmas Cake that will be enjoyed by my parents and shared with my aunts and uncles brings up memories of Elliott family Christmas dinners hosted by the sisters and sisters-in-law (my dad is one of 10 kids) that was so important to my Grandma. One of my aunts would be in charge of making Plum Pudding and all the women would be in the kitchen pulling together a huge turkey dinner with all the trimmings for a crowd of 40-45 people.

My grandma passed away many years ago and all my cousins are grown with their own families now so we don’t get together at Christmas anymore. I hold fond memories of running wild with my cousins and sitting close to where my dad was telling dirty jokes with his sisters and brothers without him seeing me. Those memories may be far off now but the Christmas cake tins give me a tangible connection to that past. The recipe I use to make Christmas cake may be new and I’m not entirely sure my teetotaller Grandma Elliott would approve of the amount of brandy I use in my recipe, but I hope she is watching from above.  I hope she is pleased that the tins she used to make an indulgent treat for her large family on the farm are still used for the same family and with as much love as she did. 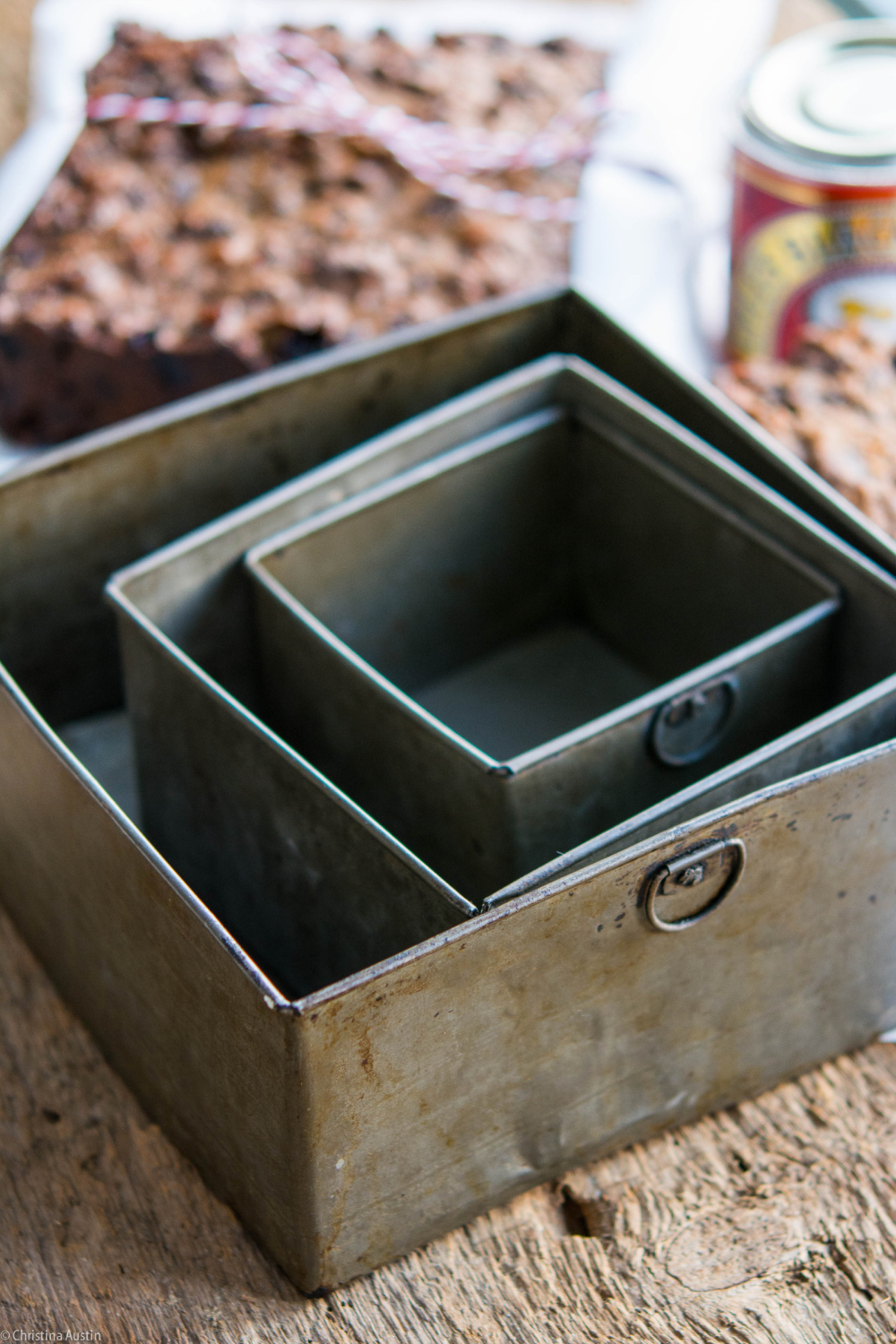 My Grandmother’s vintage Christmas Cake tins from the 1930s. Used only once a year strictly for Christmas cakes.

Traditional dark Christmas Cake with an abundance of dried fruit and matured over several weeks while being drizzled with brandy once a week. Recipe adapted from the Jamie Oliver Magazine (Christmas 2013).