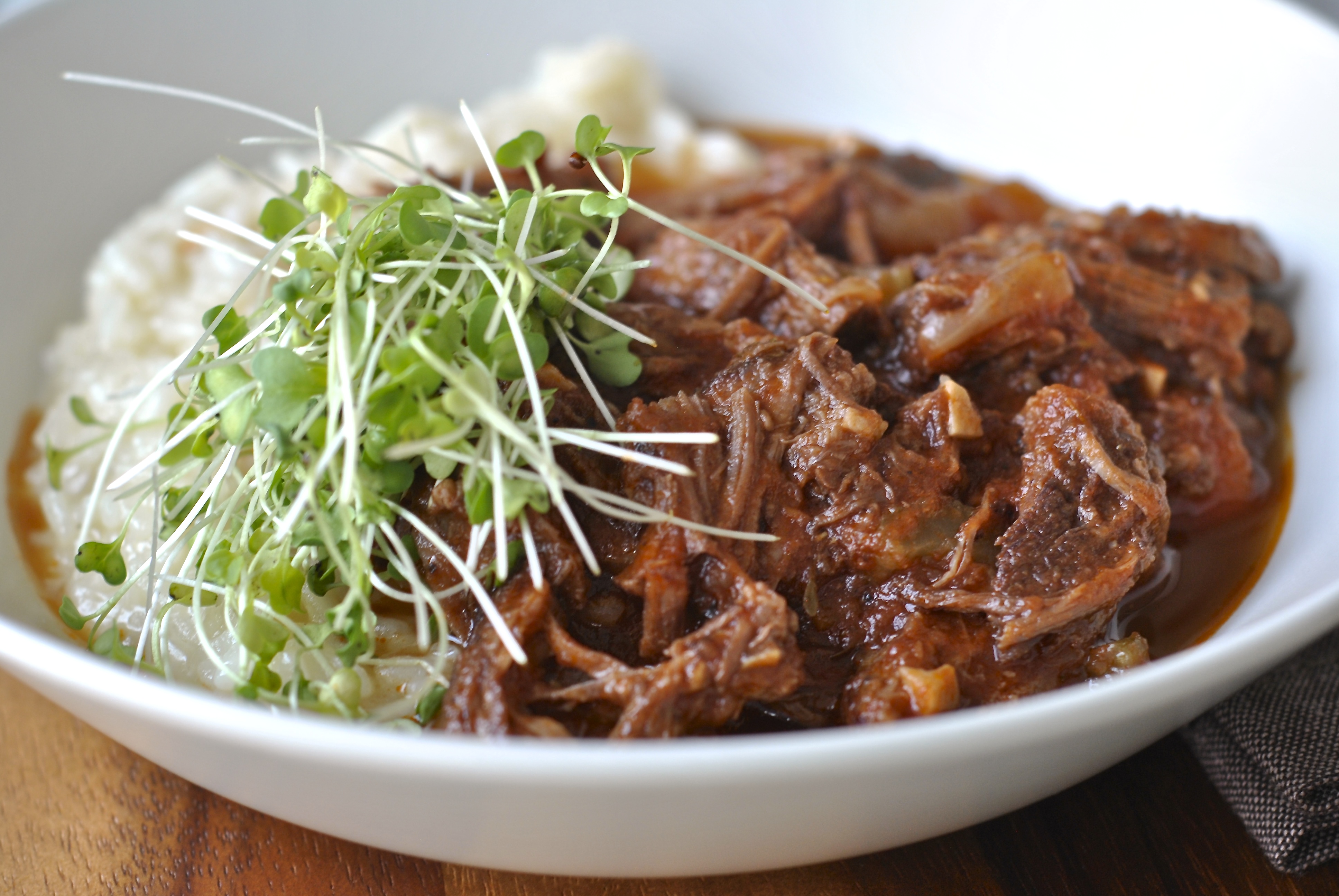 I don’t know about you but after Christmas my bank account has a wicked hangover. This means that going out to dinner is just not going to happen. In fact we are usually still in recovering at Valentine’s so we don’t go out, or do presents then either. This recipe is a fair amount of work but when you sit down to something as good as you would get in a restaurant, it is worth it.

This is hands down, my favourite dinner. The first time I had short ribs they were on the bone and in a restaurant. They were delicious but a pain in the ass to eat. When I sit down to a meal I generally don’t like to work to hard to get the food in my mouth. I cook a lot and when I do I work hard so when it is done, I want it to be done. This is one of the reasons I don’t like chicken wings or ribs.

The second time I had short ribs they were served over gnocchi and they were off the bone. It was a revelation. My cooking skills and patience aren’t up to making gnocchi so when I came up with this recipe I decided to serve it over a simple risotto. It would go very nicely over mashed potatoes, polenta or regular pasta, such as penne.

This recipe will definitely impress your friends but you will have to work for it a little bit. None of the steps are particularly hard, nor do you need an immense amount of culinary skill but there are some fiddly steps that you just can’t rush through. The ribs need to be braised for about 2 hours and then the sauce needs to cook down for approximately an hour. While that cooks down you will be shredding the short ribs off of the excess fat and then bones with two forks. That alone will take you about a half hour.  All of this messy work can be done well ahead of when your guests come over. There is no reason this can’t be finished entirely hours before people drop by and simply reheated while you prepare the risotto, mashed potatoes or whatever you are serving this over. Here is a link to Jamie Oliver’s basic risotto recipe. I use a recipe out of Giada de Laurentiis’s first book. Well, I loosely follow it. Don’t stress about the risotto or whatever you are serving the ragout with; that is just the support for the real star of the show, the braised short ribs.

For this recipe I strongly recommend you use a cast iron enamelled dutch oven. You don’t need to spend $300 on  Le Creuset one because there are many reasonably priced brands out there. I know that here in Ontario that Canadian Tire has the KitchenAid ones on sale practically every week. Get one that is about 6 quarts since that is the most useful size for making stews, big pots of spagetti sauce, and this recipe. If getting a new pot is not in the budget right now (see above re: post-Christmas budget crunch), then just use the biggest, heaviest pot you have. I have never tried cooking this in the crockpot before but that would be an option as well. You would need to start it in a regular pot so that you could sear the meat and sauté the vegetables before putting it all in the crockpot. I would also finish the dish on the stove too so that the sauce could cook down faster. If you decide to use the crockpot and need some more instruction on getting to the finished product in the picture then leave a comment and I can get into some more detail.

For this recipe I use 4 short ribs. Each short rib has about 4 or 5 rib bones in them. Some are meatier than other and if there is an excessive amount of fat on them then I cut some off. Leave fat on them though as it will make the meat tender and any that renders into the sauce you can skim off the top later.