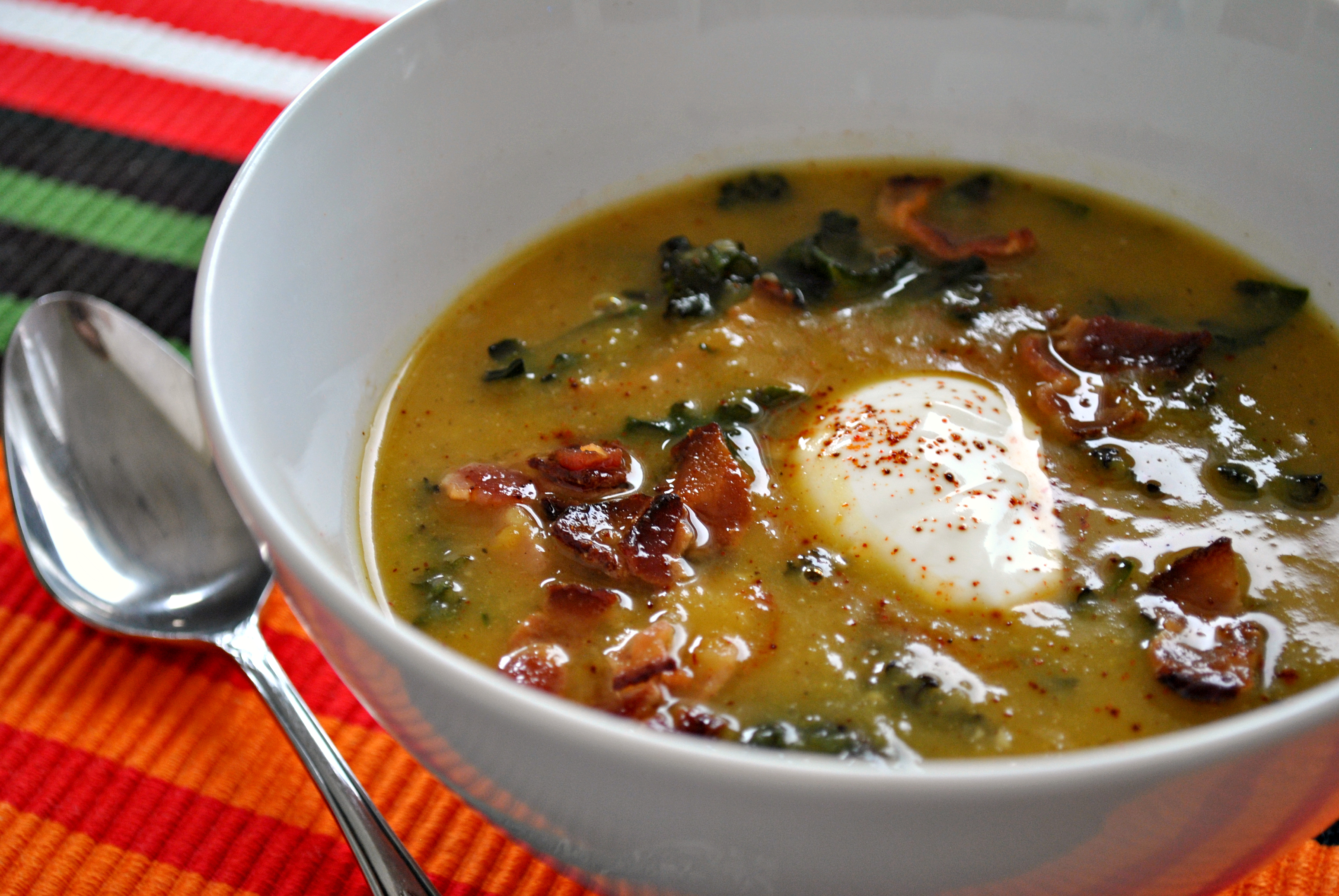 Acorn Squash and Kale Soup with bacon, a dollop of sour cream and a sprinkle of chipotle chili powder

The acorn squashes from my lovely CSA this year were so adorably tiny due to the drought in the summer.  I used six little bitty squashes in this recipe where I would have normally just used 3 regular sized acorn squashes.  Actually, I don’t know for sure that they are acorn squashes but they look close enough and acorn squash is very easy to find in local grocery stores so I’m sticking to calling these acorn squashes.

Feel free to peel your acorn squash but the size of mine and the toughness of the skin on the little buggers made it clear that peeling them would take forever and I would have sliced the shit out of my hand because the vegetable peeler would have slipped many times. I took the easy route by cutting them in half, scooping out the seeds and gross stringy bits. I added a bit of grapeseed oil to the centre of each half and then rubbed it all over the cut portion. I then just added a little salt and pepper to each one. I roasted them in the oven until a knife went into them very easily.  I will put a cooking time in the recipe but be aware that the time may be quite different depending on the size of squash you use.

While the squashes were roasting I got on with the rest of the soup. I chopped up the kale into bite sized pieces and fried the cut up bacon in a large cast-iron enameled dutch oven (similar to Le Creuset brand but a cheap version so I didn’t have to re-mortgage my house).  I then removed the bacon, leaving the glorious bacon fat in the pot and sauteed the kale in it until it was wilted. If you are really uptight about using bacon fat to cook with then just drain the fat off and replace it with some other type of oil. If you want the soup to taste really good then use the bacon fat. The soup is made with two of the healthiest vegetables – use the bacon fat, you will be fine.

After the kale sauteed for about 5 minutes, I removed it from pot and set it aside on a plate. I then sauteed the onion and garlic until it was soft and then added the broth.  When the squash was cool enough to handle, I scooped it out of the skin with a spoon and put it directly in the pot and pureed it with a stick blender.  If you don’t have one then puree the squashes with a regular blender or food processor. I would add the onion and garlic to the food processor or blender as well so that it gets blended nicely with the squash. Use some of the broth to loosen the squash up so it isn’t a claggy clump in your machine. Once you have the desired consistency,  just add it to the soup. 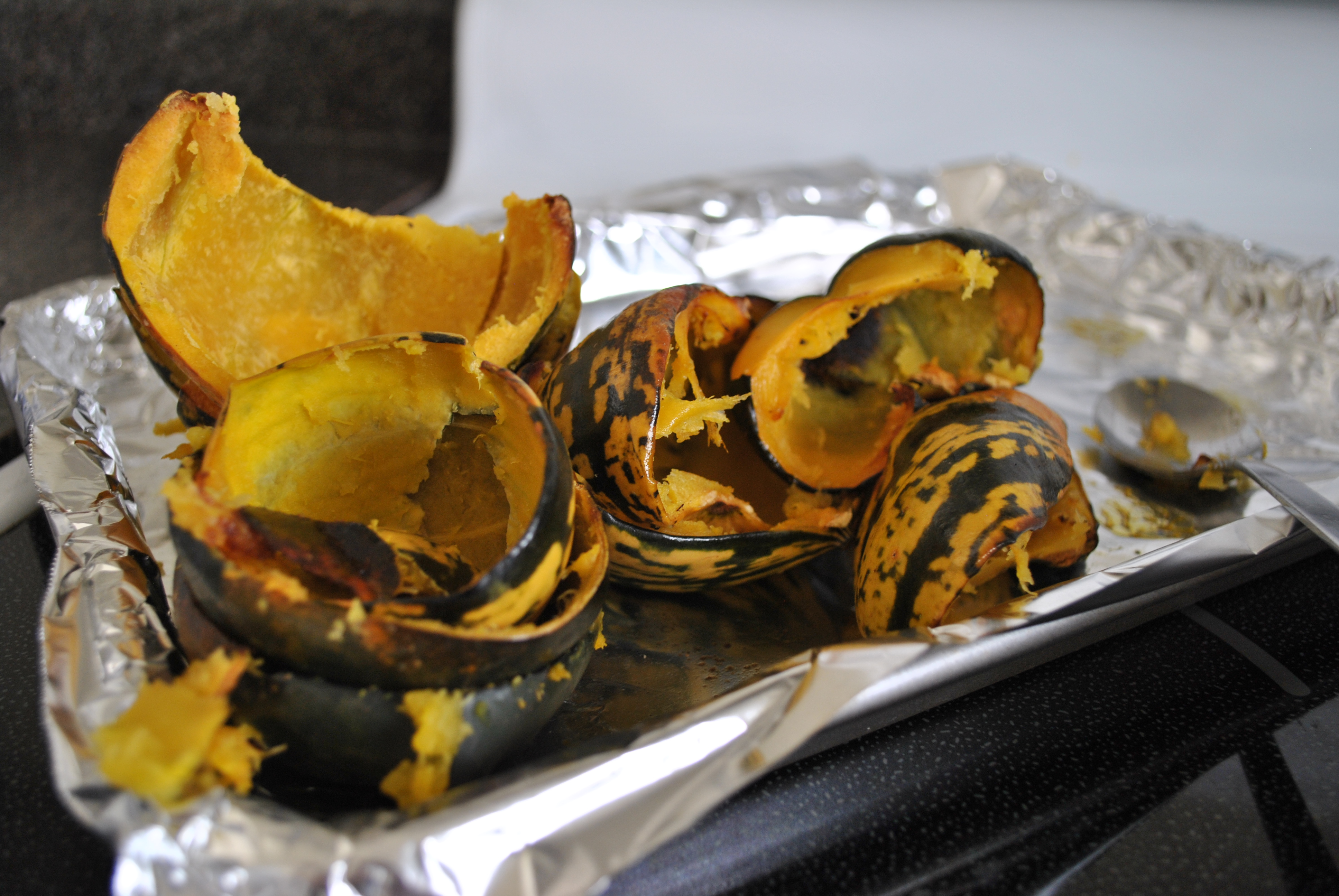 Squashes after roasting in the oven for 40 minutes

I added the spices at this point and let it cook for about 10 minutes all together except for the crispy bacon pieces. Leave them out until just before you serve it or they tend to get soggy. It is nicer if they are crisp. I serve this with a dollop of sour cream and the bacon pieces on top. I don’t consider this to be a kid-friendly soup. We didn’t even attempt to give it to Tim because he has been a real pill at mealtimes lately and we didn’t want  the dogs to wear the soup since he would have dumped it over the side of the highchair.