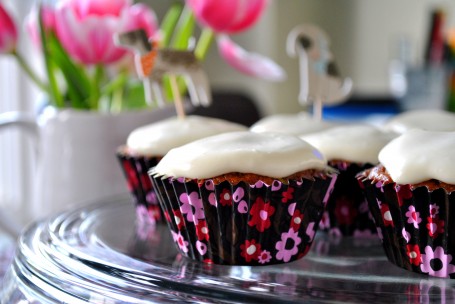 Carrot Cake Cupcakes with honey instead of white sugar! The recipe includes a gluten free option as well.

I have been planning on posting a carrot cake recipe for quite some time.  I make carrot cakes twice a year, one cake for each of my dogs’ birthdays. Don’t run away from reading this recipe – this is a human cake and I give a small piece to my dogs as a treat. Every time I would pull out the Canadian Living recipe that I used to make I would cringe at the disgusting amount of sugar and oil that the recipe calls for. I just felt that it was all really unnecessary so I was determined to do better. I’m not going to humble about this recipe – I really knocked it out of the park this time. The cake is damn near the perfect carrot cake. As a bonus, since my husband can’t have gluten any more this recipe works with gluten-free all purpose flour as well. I used Bob’s Red Mill All Purpose Baking Flour with a half teaspoon of Xantham Gum powder. I found this works better than the rice based gluten free all purpose flour I used before.

These cupcakes are not low fat, low sugar or low calorie by any stretch. What I did was remove the unnecessary oil and sugar and use a form of sugar that still has nutrients in it rather than the negative-nutrient white sugar. When it comes to the icing though – all bets are off. If you choose to ice these cupcakes, don’t punish yourself by using nasty artificial sweeteners. Just own it and put some good, tasty icing on the damn cupcakes. If the sugar-induced guilt gets to you though, you can add 1/4 cup of milled flaxseed to the cupcakes and nobody would be the wiser. It just blends right in. My family did not have a clue over Easter weekend that I add flaxseed to the gluten-free version of the cupcakes that I brought home to Barrie in my over-priced fancy cupcake holder that I bought from Bed Bath & Beyond that seemed an absolute necessity when I dragged my ass to the other side of town to go there a few weeks ago. 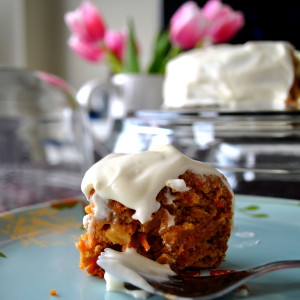 Getting the regular version of these cupcakes/cake right was easy. I tried it twice and it worked a treat both times. The gluten-free version required a bit more finessing and frankly, I was on a pretty steep learning curve. I had not adapted a recipe to have a gluten-free option before. The first time I had baked using gluten-free flour was at Christmas when I made a gluten-free pound cake for a trifle and we were drizzling Sherry on to the cake in our dishes to take some of the sweetened brick aspect away from the aptly named pound cake. Not in itself a bad thing but it was not what I was going for.

The first attempt resulted in an under-baked cake because for whatever reason, the cake tester came out clean but the centre was still in its batter form, albeit slightly heated through. I didn’t know until I cut a piece from in. Before I cut into it I was dismayed that they cake had fallen in the centre but that was not clue enough for me to realize what the problem was. The outer ring of the cake was cooked through and it tasted great and had good texture.

The second time I made it, I forgot to put the vanilla in and only realized this when the cake had been in the oven for ten minutes. Genius that I am, I thought that maybe I could mix it in anyway. No. You can not mix vanilla into a cake after it has been baking for 10 minutes. Before you think that I am a total idiot, in my defense it was 10pm on a weeknight, I work full time, I have  a toddler and I had just baked 2 dozen carrot cake cupcakes with regular flour. It looked terrible but I was going to see the cake through; until I dropped the pan cake side down on the oven door when I was taking it out to test it. After a torrent of expletives, I chucked the cake in the garbage,  washed the mixing bowls, measuring cups, etc. and tried again. Happily I ended up with a lovely, vanilla-included, fully baked version of the gluten-free carrot cake.

It has not gone without notice that most carrot cakes include nuts in the recipe. I loathe nuts in baked goods with a fiery passion but if you felt the need to ruin your cake with nuts, be my guest.  A half a cup of chopped walnuts or pecans should do the trick.

Carrot Cake with honey instead of white sugar with a gluten-free option.

*If you are making the gluten free version and are using Bob's Red Mill Gluten Free All Purpose Baking Flour you use the same amount of flour but add 1/2 tsp Xantham Gum powder. If you are using a different brand of gluten free all purpose flour then follow the directions on the box for the conversion from conventional flour to their gluten free product. **A full size cake version will take approximately 40 minutes depending on your pan and oven. Set the timer for 35 minutes just to be on the safe side. ***When testing a gluten free version, I recommend using the tip of a knife to pierce the centre of the cake so that you can look into the cake. If it looks like it is still wet in the centre then add a few minutes to the bake time.